Receiving much praise for his comedic role in TVB drama, OMG, Your Honour <是咁的，法官閣下>, 56-year-old Eddie Kwan (關禮傑) is currently being dubbed as a one of the most beautiful men in this generation.

Reacting to his new name, Eddie laughed and said he does pay great details to his looks. He actively maintains good dieting habits and does regular exercise. Recalling when he had to work with young newcomers in TVB series Airport Security Unit <機場特警>, Eddie added extra gym training for himself. He said, “Obviously I didn’t train as hard as them, but it was still hard work.” Asked if he had to take off his shirt, Eddie said, “I told them no! But we still had to wear fitted t-shirts. It was like filming Police Cadet ‘84 <新紮師兄> again, except now I got to play an officer instead.”

Playing a lawyer in a TVB drama for the first time, Eddie received a lot of compliments for his character and brotherly-bond with Ben Wong’s (黃智賢) character. Unlike other legal dramas in the past, OMG, Your Honour is lighter and peppered with little jokes. Despite the initial challenge of learning the legal jargon for his role, Eddie said it wasn’t overly stressful. The cast also had a finished script, unlike in the past where many TVB dramas were filmed with an incomplete script and many last minute dialogue revisions. 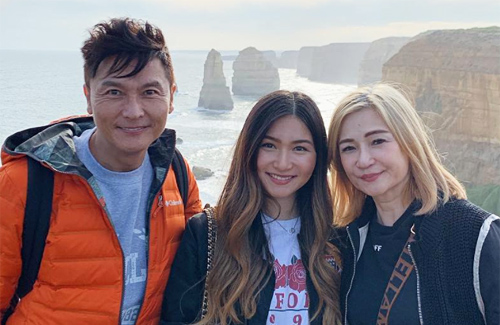 One of the most notable applicants in the pageant is actor Eddie Kwan’s daughter, Fabienne.