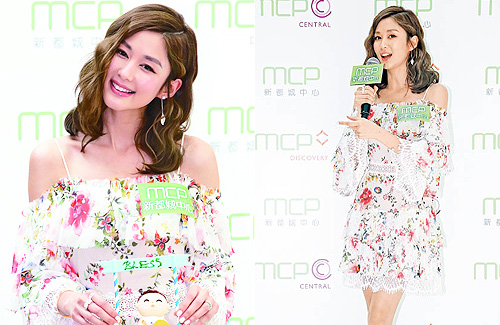 Leaving TVB after a seven-year work relationship, Eliza Sam (岑麗香) returned home to Vancouver to recharge for a month. Since she still loves acting, Eliza has signed with good friend Wong Cho Lam‘s (王祖藍) management company, which is partially funded by Shaw Brothers.

Eliza said she will remain in Hong Kong instead of focusing on the Mainland Chinese market. “Since I’ve filmed television dramas for so many years, I’ll like to make more movies.” Possessing a good relationship with TVB, Eliza does not mind working with the station again. “There’s a lot of preparation work to do if I go to Mainland China. I’ve been trying to learn Cantonese for seven years. It’s okay to learn a little bit Mandarin though. I’m forcing my husband to speak more Cantonese too.”

Although refusing to reveal the details of her new contract terms, Eliza said she is very pleased with her new work schedule which gives a better work-life balance. “Now, I have more free time to spend with family.”

While in Canada earlier, Eliza had attended the weddings of her brother-in-law and cousin. As her close friends, including Leanne Li (李亞男), are going to be mothers, Eliza also hopes to become pregnant too. “Everyone told me to not give myself too much pressure. I got a lot of tips from friends.” Asked if she knew the gender of Leanne’s baby, Eliza said, “I don’t know. Let Leanne announce it herself!”