After 24 years, actor Eric Li (李天翔) is finally leaving TVB’s nest mid-May in search of more opportunities. With less than a month left to go in his contract, Eric expressed the company did not arrange any new filming jobs for him. Hence, he can only rely on himself to find singing jobs at shows abroad and participate in various performances. As for his plans afterwards, the 42-year-old bluntly said companies did not reach out to him yet. “Of course [my income is less now] since I don’t have a base salary anymore. Now, I have to depend on myself. I hope more people will think of me for jobs.”

Although leaving TVB means forgoing a steady income, it’s a risk that he’s willing to take. Eric explained, “I’ve been in the industry for so many years, and I’ve actually thought about leaving TVB for many years, but because the company has been so good to me and gave me dramas back to back, I haven’t had time to think about it up until this year when my contract was almost up.”

He continued, “I’m starting to get old and it won’t make sense for me to leave a few years later when I’m older. That’s why I chose to leave now to explore what’s out there.”

Despite not having a concrete plan once his contract officially ends, Eric thanked Li Lai Ha (李麗霞) for bringing him along to perform at shows to make money. In addition, Eric will have the opportunity to perform two duets and a solo at at Lee Ho-kwan’s (李浩群) upcoming concert. “I’ve known Lee Ho-kwan for about two years now. He’s been in the entertainment circle for many years. Aside from being in front of the camera, he also does work behind-the-scenes and was a director,” Eric gushed about the veteran. “I will not only be singing but also act in the concert. It has a storyline and it’s quite fun.” 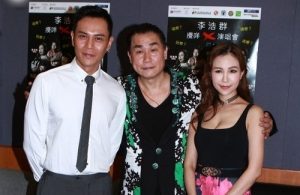