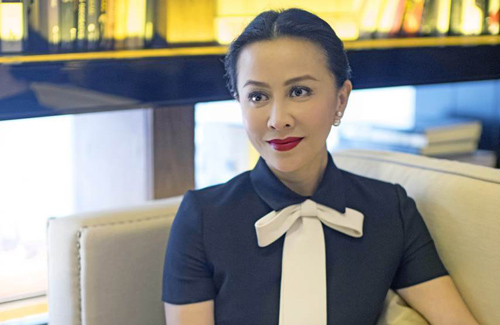 Due to his long-running career in the entertainment industry, Eric Tsang (曾志偉) has witnessed the growth of many female celebrities including Carina Lau (劉嘉玲), Maggie Cheung (張曼玉), Cherie Chung (鍾楚紅), and Michelle Reis (李嘉欣).  In a recent interview, Eric revealed that when Carina first started in the entertainment industry, she was old-fashioned and lacked acting skills. However, she possessed a great personality and social skills which allowed her to find success and have a lasting presence in the industry.

Due to her Suzhou roots, Carina could not speak Cantonese properly when she first entered the industry. She did not even know how to wear high heels and took time to get accustomed to the cosmopolitan lifestyle in Hong Kong. However, Eric praised that Carina was very hardworking and reached stardom through her diligence.

“Carina completely lacked acting skills,” Eric said, “But she has a great personality and loves to help people. This characteristic is very valuable, which is why Wong Kar Wai was willing to work with her and boost her to superstardom. To become a film queen, one will have many fans. If a person has a bad personality, then they will be a bad role model for their fans.”

Due to his lengthy career as a Miss Hong Kong judge for the past 23 years, Eric was invited to participate and film for CCTV’s upcoming show, Come! Cinderella <來吧！灰姑娘>, where he will serve as a mentor to aspiring young ladies. With his innate ability to observe and accurately critique, Eric’s main criterion when judging pageants resides on a person’s characteristics and her  intelligence. He believes that while a person can hone their skills through time, it is difficult to nurture positive personality characteristics and intelligence.