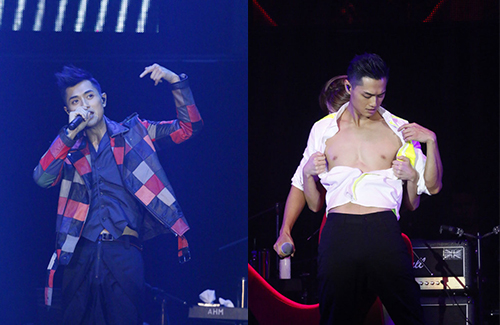 In the concert, the 31-year-old singer surprised fans with a sexy dance number with a female dancer. They started off with a slow, sensual dance, but the dancer later unbuttoned his shirt and tried to tear it off, revealing Fred’s bare chest. The dancer then pushed Fred to a sofa and pretended to kiss him.

After the song ended, Fred shy buttoned back his shirt, but fans retorted that they could not see him well. Fred laughed and said, “Enough! Next time!”

The concert showed many pictures of Fred when he was younger, including the days when he performed with his band, HOME. Fred said, “These pictures are pretty interesting—the fat little kid had his own stage. When I was younger I used to play ‘Monica’ a lot with a toy guitar, but I didn’t know my aunt was watching me the entire time! I learned kung fu when I was in primary school because I was bullied a lot. I was a quiet boy, so my uncle told me to learn kung fu. He was also the one who told me to learn the guitar. I’m very thankful.”

At the end of the concert, Fred’s fans presented him with a large fanned ticket to the Hong Kong Coliseum, wishing him that he would be able to hold his own concert at the renowned Hong Kong Coliseum in the future. Fred thanked his fans again during the encore, explaining that fans from all over the world has flown over to Hong Kong just to watch him.

Fred received a brief interview after the concert. He expressed that he spent a long time training at the gym and was very nervous before performing his sexy dance number. Asking how many time he has rehearsed the performance, he laughed and said, “We rehearsed once yesterday. Tonight was the second time. (Is this your limit?) Somewhat. (What if it’s for the Hong Kong Coliseum?) I’ll think about it when that time comes. I do want another breakthrough.”

Mentioning that singer Alex To (杜德偉) once wore only briefs on stage, Fred said, “Well, he had a song to go with it. I don’t have that confidence.”