Friend Reveals that Mandy Wong May Get Married Soon 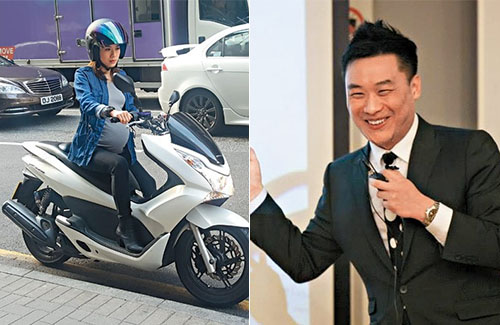 When it comes to her private life, 34-year-old Mandy Wong (黃智雯) is everything but high profile, but a friend of the actress said she’s close to tying the knot with her non-industry boyfriend.

According to the rumors, Mandy is dating Anthony Jim (詹文天), a top executive of the H.K, Furuilin Jewel Group. The speculations came to be when Mandy was spotted spending a night at Anthony’s house. The couple also recently purchased a new car, a sign that they could be living together.

When paparazzi tried to grab more info from Mandy’s inside sources, Cheng Tsz-bong (鄭子邦), boyfriend of Mandy’s close friend Elaine Yiu (姚子羚), told the press, “Maybe the next person to get married will be Mandy Wong!”

While shooting her new TVB drama Nothing Special Force <雜警奇兵> in North Point recently, Mandy, who plays a pregnant cop on the show, shared her feelings about getting pregnant, and hinted that she wants to have children of her own someday.

There’s been talk that Mandy and Anthony have been dating for at least four years already. Last year, a netizen claimed that it saw a picture of Mandy wearing a wedding gown on social media. Last May, Mandy’s close friend Paisley Wu (胡蓓蔚) revealed that her group of friends, the Nonsense Club (胡說八道會), will be having a big project coming up. At first, it was rumored that Elaine, who has been dating Cheng Tsz-bong for quite some time, was getting married, but Cheng Tsz-bong denied, saying instead, “Maybe it’s Mandy Wong!”

Mandy has since denied the speculations, but that didn’t stop the paparazzi from seeing how close Mandy and Anthony actually were. From spotting Mandy spending the night at Anthony’s, to purchasing a new car, paparazzi said the couple are close to tying the knot. In response to this, Mandy said, “I want to keep my private life low profile, so I will not respond to too many questions!”