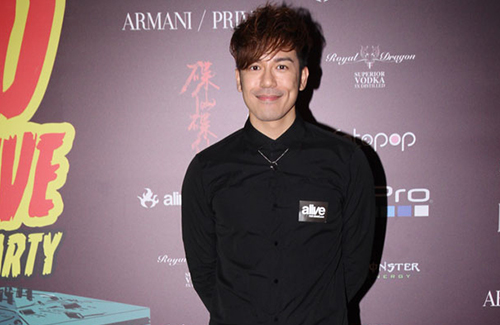 Appearing at a Halloween event for a horror film, Sammy Sum (沈震軒) revealed that his TVB contract will be ending next year and he is unsure if he wants to renew.

The 32-year-old actor and singer, who shot to fame in last year’s Line Walker <使徒行者>, has not had any new television dramas to film after the youth drama Young Charioteers <衝線>, which aired earlier this year. With no work and a lack of public appearances, gossip magazines were quick to report that TVB had frozen the Line Walker star because he refused to renew his contract.

The gossip reports, however, were not entirely wrong. Sammy recently made a public appearance for a Halloween event, admitting that he has not been filming dramas due to some problems with his TVB contract. His management contract is set to expire next year.

“Yes. I haven’t been filming dramas because of some problems in my contract,” confirmed Sammy. He does not find it a pity to have no work, saying that he’s been using this resting opportunity to further develop and improve himself. “It’s a good thing to have a rest. In the past, I used to film drama after drama… that’s really tiring on the artist.”

Asking if TVB has offered him a contract extension, Sammy said, “Of course. They’ve been talking about renewing my contract since two years ago. We’ve been in talks for a long time! I just don’t think it’s necessary to make a decision so soon.”

Has other management agencies reached out to Sammy? He replied, “Yes, which is something that I have to consider when negotiating my contract with TVB.”