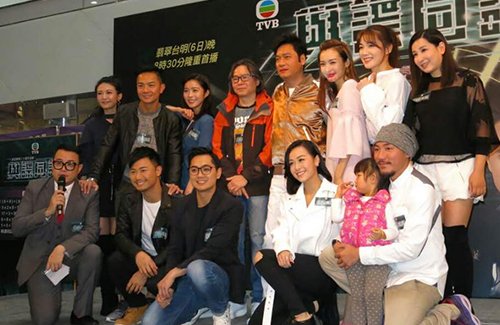 New TVB crime drama Provocateur <與諜同謀>, starring Gallen Lo (羅嘉良), Fred Cheng (鄭俊弘), Ali Lee (李佳芯), and Jacqueline Wong (黃心穎), will be premiering on Monday, March 6. On Sunday, the cast appeared at an event to promote the drama at a shopping mall, playing games while they introduce the drama’s cast and characters. After losing a game, Gallen was punished to wear red lipstick, which reminded fans of Gallen’s iconic role as “Diana” in the 1999 drama Mr. Diana <先生貴姓>.

Many viewers have expressed their anticipation for Gallen’s return, but the actor himself said he doesn’t feel the pressure, and has confidence in the drama. “I’ve done my best, so there’s no pressure. This drama, Provocateur, has quality. It is a thriller and very chase-worthy.”

Acknowledging that most of his costars in the drama are junior actors, Ali said, “He keeps telling us that he’s still young. In group photos, he’d be the first one to squat down in the first row.”

“That’s because you’re our big senior,” said Ali. “We can’t let you do that.”

“I actually have a very young mindset,” said Gallen, defending himself. “I like to say jokes!” Gallen then said that he knew his costars felt a lot of pressure working with him, but that quickly fizzled out.

“He’s the first senior actor I’ve worked with who would approach the juniors to just chat,” said Ali. “He’s very friendly and he makes the filming environment very comfortable.”

Asking if Gallen would be returning for Threshold Again <再創世紀>, TVB’s sequel for At the Threshold of an Era <創世紀>, Gallen humbly said, “TVB has talked to me about it, but there’s a schedule clash. However, I am honored that I had the chance to be part of the first one.”

Mentioning that most of the fans who attended the event were Fred’s fans, Gallen said, “He’s amazing. There are so many fans here! I would have to start singing again. Good thing I won the theme song so I haven’t completely lost!”

Fred, who provides the voice for Provocateur’s ending theme, said, “Gallen and I always talk about singing and recording. After recording the ending theme I immediately sent it to Gallen, and he offered me a lot of his opinions. I would love to sing a duet with him if the opportunity comes up.”