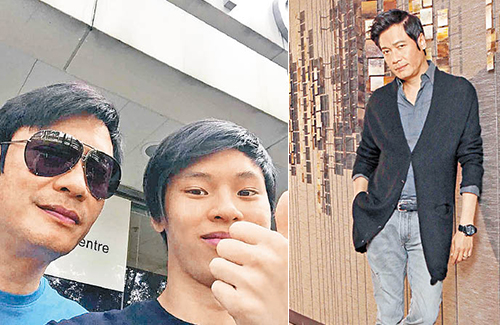 Three-time TV King Gallen Lo (羅嘉良) is back in Hong Kong to promote his new TVB drama Provocateur <與諜同謀>, now airing weekdays at 8:30 p.m. He costars in the drama with younger actors such as Ali Lee (李佳芯), Jacqueline Wong (黃心穎), and Fred Cheng (鄭俊弘), the latter two playing his adult children. Working with rookie actors was a thrilling experience for Gallen.

As for Gallen’s own children, 18-year-old son Alex (羅裕珹) and 3-year-old daughter Sela (羅詠婷), the happy father said they have inherited his own love for performing. Alex, now a college student in Toronto, demonstrated a passion for music since a young age, and loves to sing.

“He’s loved music for as long as I can remember,” said Gallen. “I’ve never heard him sing off-key before.” (What about your daughter?) “She also has great musical talent. She loves to talk too. She’s an Aries, so she’s very lively. She’s not afraid of boredom. If no one is playing with her, she’ll play with herself.”

Gallen agreed with the comments about Sela looking mixed, saying, “I don’t know if this is true, but my parents have told me that one of my ancestors from my paternal grandmother’s side could be part Brazilian. That’s probably why my daughter looks mixed.”

Asking Gallen if he would support the idea of his children joining the entertainment industry, he said, “This industry isn’t easy. You’re going to suffer a lot. There are many things going on. To be honest, I don’t really want them to join the industry. I want them to live happily. This industry is stressful, and there are too many things you have to deal with.”

But if his children really wanted to become entertainers, he would not stop them. “It bottles down to fate. If fate wants them to become singers or actors, then it will happen.”