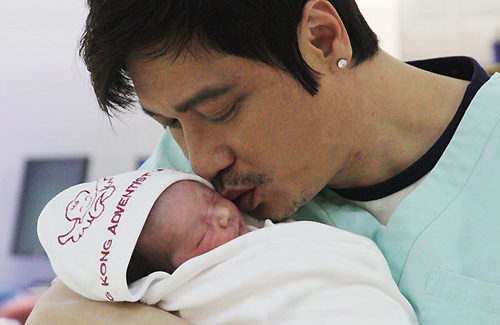 The happy and excited father accepted a brief interview with the press in front of the Hong Kong Adventist Hospital around 4 PM today, exclaiming, “They are doing well! Thank you for your concerns!”

Sophie gave birth to Sela via C-section in the early afternoon, and the baby girl weighed 7 pounds and 4 ounces at birth.

Gallen and Sophie were in tears when they first heard Sela’s cries. Gallen said, “She is very lively. Her eyes are huge and they were already opened and rolling around by the time she was born.  Even the doctor was surprised!”

Who does Sela resemble? “I think she looks more like her mother. She has my nose, but she has my wife’s eyes and lips.”

Gallen revealed that Sela was named after Sophie. “My wife’s name also starts with an S, and her Chinese name (Yan) means rock. Sela is [the Hebrew] word for rock.” Sela, however, does not have a Chinese name yet.

Sophie will be recuperating in the hospital for the next five days. Gallen especially brought Sophie to Hong Kong to give birth due to the more advanced local healthcare. Afterwards, Sophia will be spending her postpartum period in Shenzhen. Gallen is not worried about the H7N9 bird flu virus that is currently spreading in mainland China, and expressed that he plans to return to Beijing for work soon after.

Gallen met Sophie on the set of mainland drama, Perfect Ending <完美結局>, in 2008 and married a year later. The former TVB actor also has one son, born in 1999, with his ex-wife Clare Fong (方敏儀), whom he separated with in 2008 after 10 years of marriage.