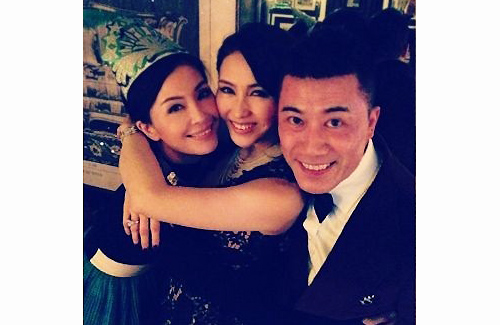 Former actress, Gigi Lai (黎姿), has managed to slimmed down in time for the New Year. After giving birth to her third daughter, Pegella, in October 2012, the 41-year-old avoided the headlines and stayed at home to nurture her daughters.

On December 31, a much svelter Gigi and her family hosted a glamorous New Year’s Eve party at Sevva, a large restaurant located inside the Prince’s Building in Central. Gigi’s evening gown, including her jewelry accessories, cost over $1 million HKD. When asked whether or not she would try for a son in the coming year, Gigi just smiled and kept her head down.

In May 2007, Stephen became seriously wounded in a near-fatal traffic accident when a taxi he was riding on collided with another. Stephen was thrown out of his taxi and suffered severe blows on his head and back. Gigi took a break from her acting career from 2007 to 2008 to focus on caring her brother and his beauty clinic.

Christine Ng (伍詠薇) and her husband, Kasey Lin (練海棠), were also invited to the party. Christine revealed that Gigi was her matchmaker and said, “It was Gigi who introduced my husband to me. She plays a very important role in our lives. We haven’t had the chance to spend time with each other much after we started our own families. We only have time to gather together on these special occasions.”

For her New Year’s wish, Christine expressed that she hopes to be able to spend less time filming and more time working on her beauty company. “But most importantly, I wish for everyone to be happy and have good health.”

When asked if she hopes her good friend, Sharon Chan (陳敏之), would be able to marry soon, Christine laughed, “She already has a stable boyfriend. He is a great man. I’m not worried for her!”