Last August, Grace Chan (陳凱琳) and Kevin Cheng (鄭嘉穎) tied the knot in Bali after dating for over three years. In the blink of an eye, the couple has been married for a year, and today, the 28-year-old actress shared her joy on Instagram.

The young mom posted a photo of their six-month-old son, Rafael (鄭承悦), sitting on the floor next to a large bouquet of yellow roses and a big cake. Kevin got his wife 100 roses as their first wedding anniversary gift. Grace captioned the photo, “Congratulations on your (belated) first year anniversary daddy and mommy!”

Grace and Kevin got married last year on August 12 at the luxury Bvlgari Resort Bali The CHAPEL. At the time, rumors of it being a shotgun marriage emerged, and it was confirmed in November when the newlyweds announced they were expecting. After Grace gave birth to Rafael last Valentine’s Day, the couple often shares family photos on social media. 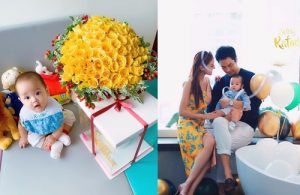