After three years of dating, 49-year-old Kevin Cheng (鄭嘉穎) and 27-year-old Grace Chan (陳凱琳) officially tied the knot in a romantic Bali wedding today. HK tabloids may like to feed off of their 22-year age difference, but the years didn’t set them apart at all. When the couple saw each other at the altar, they couldn’t help but burst into tears. “I will take care of you forever,” Kevin told Grace. “I love you so much!” 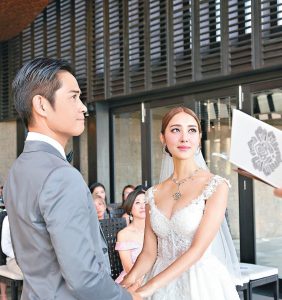 Like many Cantonese weddings, Kevin and Grace had a traditional tea ceremony in the morning and followed Western-style customs afterward. Grace flaunted a 4.18-carat diamond ring and wore a fitting wedding gown, showing no signs of pregnancy. Kevin joked in his wedding vow, “My mother has always been rushing me to get married. I told her that I probably wouldn’t get married until after I have a baby. Sorry mom, I’ve scared you for so long!”

He then turned to Grace and said, “I’ve never experienced the kind of happiness and joy that you have given me. You are the reason why I want to start a family. After our one year anniversary, I proposed to you, but the time wasn’t right until today. Thank you for marrying me. No matter what the future takes, I want to walk that road with you. I will take care of you forever. I love you so much!”

Grace thanked Kevin four times in her wedding vow. Visibly nervous and in tears, Grace said, “I can still remember the first day we met. Your first words to me were, ‘You need to thank me, because I was the one who encouraged the producer to cast you.’” Kevin interrupted with a laugh, “I actually encouraged many producers.” 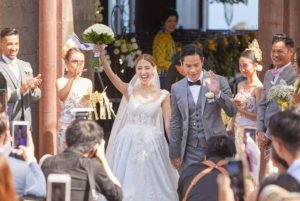 Grace continued, “My first impression of this guy was that he’s pretty strange. He spoke so much in our first meeting! Who knew that after dating, the words thank you would contain so much meaning. I want to thank you, because I am someone who has always lacked confidence, and when I felt the most disappointed in myself, it was you who kept on encouraging me. You encouraged me to stay strong, to let go, to understand that the hardships would all eventually pass, that I must pursue to be happy, and you were right every time. I want to thank you, for teaching me how to be human. When I’m with you, we become us. When we start a family, it will become them. I look forward in this family with you. I want to thank you, because with you I understand happiness, and I already felt that warmth and love on our first date. Although some would say that it would all go away within a few years, I only get this kind of feeling with you. I want to thank you, for bringing me forever happiness. I love you.”

Kevin and Grace’s mothers cried after hearing their vows. The newlyweds themselves also couldn’t contain their tears. Grace’s father struggled to hold back his tears. 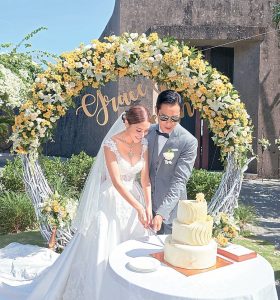 In a phone interview after the wedding, Kevin admitted that he was very emotional during the ceremony. After laying eyes on Grace walking down the aisle, he couldn’t help but cry. Kevin was the most emotional when they exchanged vows. “Thank you for everyone’s blessings,” he said. “Thank you so much!”

Grace was in a bundle of nerves when she woke up Sunday morning to put on her wedding cheongsam. “I was worried. I’m so clueless when it comes to these traditional customs, and when I heard [Kevin] at the door, I got even more nervous! Randomly, I told Kevin to sing a few phrases from his song ‘A Thousand Wishes’ <一千個願意>. I told him to sing this song because I felt I could really relate to the lyrics!”

Grace purposefully told Kevin to leave for the church earlier so she could surprise him with her wedding dress. “When the music started, I felt myself breathing really hard. I held onto my dad and walked down the aisle. I was trying so hard not to cry, but then I saw Kevin crying, and I couldn’t hold it in anymore. I didn’t expect him to cry before me!”