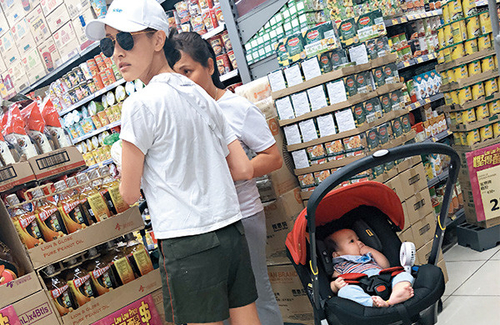 Since giving birth to Rafael (鄭承悦) this past February, Grace Chan‘s (陳凱琳) husband Kevin Cheng (鄭嘉穎) hired a foreign domestic helper to assist the mother and son duo. Still, Grace seems to prefer to do everything personally – when she’s not attending work events, she’s taking care of her baby.

A few days ago, Grace took five-month-old Rafael to the supermarket in a stroller, accompanied by their helper. Dressed very casually, Grace was responsible for pushing the stroller while the helper tended their shopping trolley. Chubby Rafael was the most relaxed, chilling in the stroller, looking at his mommy from time to time.

As the supermarket is located in the basement of the mall, the trio had to take the escalator. Grace and the helper both lifted the baby stroller and stepped onto the escalator, however, Grace looked extremely exhausted by the third step. It appeared that she didn’t have enough strength to carry the stroller, making the entire process seemingly dangerous.

After entering the supermarket, Grace and the helper carefully selected the frozen meat while discussing what to buy. Their relationship seemed harmonious. When they split up, Grace pushed the stroller into another frozen section to buy vegetables. Afterward, she went to the dry food aisle to meet up with her helper before picking out some eggs. Grace also took the chance to stock up on some diaper deals.

Meanwhile, Rafael looked around curiously and obediently. After spending nearly half an hour at the supermarket, the group returned to the apartment. 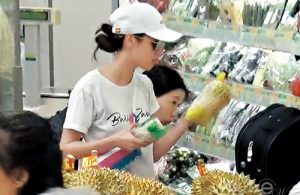 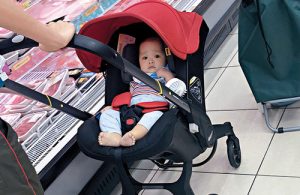