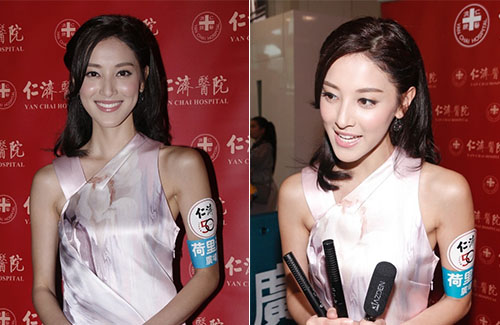 Yesterday, Grace Chan (陳凱琳), twins Adrian Chau (周志文) and Daniel Chau (周志康), and Karl Ting (丁子朗) appeared in an event together for a series of toy cars. Grace, who attended a wedding expo a few days ago, revealed that she’ll be getting married in two years, but her boyfriend, Kevin Cheng (鄭嘉穎), doesn’t know about it.

“I haven’t gotten a response from him,” said Grace. “He was busy rehearsing his play yesterday.” (Then does he know about it?) “He probably doesn’t.”

Asking if Grace’s father has heard about her “marriage news”, she said, “I don’t know. I didn’t ask him.” (Do you think he’ll be happy to hear that it’s in two years?) “I don’t know. I have to ask him!” (Your family hasn’t really reacted to this story?) “It was a wedding event, so they expected me to answer these sort of questions. It was within expectations.” (Won’t your father miss you if you get married?) “My father and I are really close. Daddy’s girl.”

Adrian Chau, who is rumored to be dating Moon Lau (劉佩玥), clarified that he is only friends with her, but believes that Moon would make a great girlfriend. His younger brother Daniel added, “Yes, we’re all just close friends. My wife and I meet up with her occasionally!”