Hawick Lau Gives Half of his Wealth to Yang Mi? 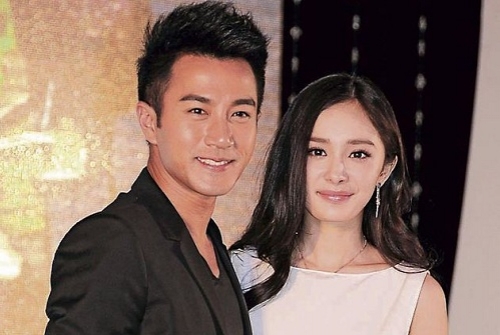 Hawick Lau (劉愷威) once proudly proclaimed that he and Yang Mi (杨幂) are as close as ever, and even slipped in an interview that he plans to propose to Yang Mi in 2013. But is Hawick as confident in the relationship as he seems?

While Hawick was on his promotional tour for his new mainland Chinese drama, Beauty Without Tears <美人无泪>, an interviewer sneaked in a question asking whether or not he plans to marry Yang Mi next year. Hawick did not avoid the question, and exclaimed, “I’m planning it!”

But recent sources claim that Yang Mi is actually not prepared for marriage at all, and if Hawick does eventually propose to her as he claims to, she will most definitely refuse him in a heartbeat.

Since starring in the extremely popular Palace <宫> in 2011, Yang Mi experienced a meteoric rise to her popularity and wealth. Aside from starring in numerous blockbuster dramas and films, Yang Mi also established the Yang Mi Studios, her own production studio. Yang Mi Studio’s first project will be the 30-episode Chinese Girl <中国女孩>, a Chinese remake of the popular American television series, Gossip Girl.

Yang Mi has expressed numerous times in her interviews that she is not planning for marriage anytime soon, insisting that her career comes first.

However, Yang Mi also revealed that her parents really like Hawick, and that their marriage always became a hot topic to put on the dinner table, hinting that she and Hawick had discussed marriage plans before.

Whether or not marriage plans were really discussed, it seems that Yang Mi was more against it than for it. In order to convince Yang Mi otherwise, Hawick reportedly gifted Yang Mi with a $30 million HKD mansion in Hong Kong. As reported by Hong Kong’s East Week magazine, Hawick also gave Yang Mi 40 percent of his company’s stock, allegedly giving up half of his entire wealth to Yang Mi.

The Hong Kong tabloids claimed that Hawick, who is twelve years Yang Mi’s senior, is threatened by Yang Mi’s youth. In order tie Yang Mi’s heart, he is willing to give up half of his wealth to her, and is trying his best to talk Yang Mi into marriage.

Hawick’s father, veteran actor Lau Dan (劉丹), is reportedly worried about Hawick. One of Hawick’s mainland Chinese friends said, “Hawick is too rash! [Yang Mi] doesn’t need money, and if she was to marry him, it would not be for money! She is still very young. He’s already going to forty, it’s too dangerous! But he is willing to do anything for love. None of us could talk some sense in him.”

57 comments to Hawick Lau Gives Half of his Wealth to Yang Mi?