Attending his daughter Noemie‘s school concert, Hawick Lau (劉愷威) was unable to stop himself and kissed her fully on the lips amid a packed auditorium. The five-year-old girl’s latest photos showed a strong resemblance to her mother, Yang Mi (楊冪), when she was a child. 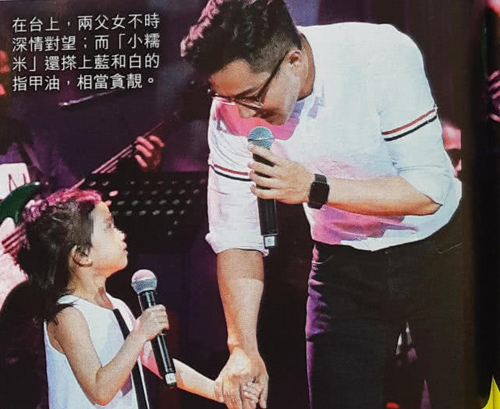 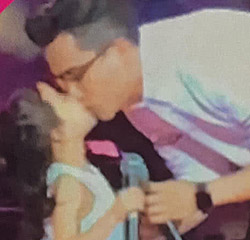 Although Yang Mi and Hawick both agreed to share custody of their daughter after their divorce, Noemie continues to live in Hong Kong with Hawick’s parents and attends school locally.

Recently, Hawick accompanied his daughter to her school concert where the duo sang “You’ve Got A Friend” on stage. After seeing the audience cheer Noemie loudly for her cute performance, Hawick proudly kissed his daughter on the lips.

Not long after the pictures from the concert were released, fans quickly dug up an old childhood photo of Yang Mi and saw that the mother-daughter duo looked like exact carbon copies of each other.

Known to be one of China’s top earning actresses, Yang Mi has always been criticized as an irresponsible mother – especially after an insider revealed that she only spent a total of 37 days with Noemie in the last three years.

But the single mom gained respect after appearing on variety show, Great Escape <密室大逃脫>, where Yang Mi talked about her views of child-rearing. On the show, Yang Mi said that it’s important that parents show approval and encouragement, and stressed that they should never say hurtful words to their children.

Yang Mi expressed, “It’s important to respect children’s choices – they are their own individual beings. We need to give them space to think independently and let them make their own decisions.”