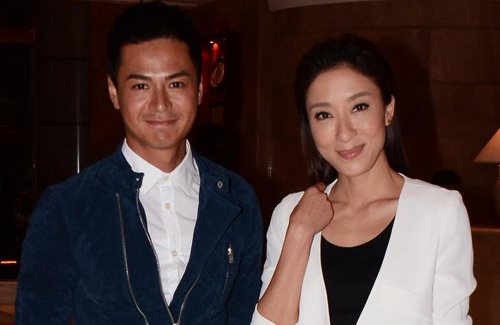 Tavia Yeung and Him Law Run Away from Marriage Question

Although normally keeping their romance low-profile, Tavia Yeung and Him Law surprisingly arrived at the banquet together. Three years into their relationship, Him reportedly moved into Tavia’s home to maximize their time together. Tavia was spotted buying a new condo earlier, allegedly preparing for their future love nest.

Asked when they plan to get married, Tavia quickly looked for a means of escape. “What? Let me see if the bride looks beautiful, and I’ll let you know later.”

Him was similarly coy in dodging the sensitive marriage question. “Let me get drunk first, then you can ask me!”

Currently four months pregnant, Aimee Chan appeared with a slightly rounded belly at the banquet. Extending her acting hiatus from TVB after becoming pregnant for the second time, Aimee admitted she has been feeling tired as she has to take care of her ten-month-old son, Aiden Joshua, at the same time.

Contrary to earlier reports that claimed Aimee is carrying a girl in her second pregnancy, she said she does not know the gender of the baby yet. Husband Moses Chan said they did not have a preference, as a second baby will only add to their “happy family”.

As former TVB manager, Chan Ka Lei, possessed good relations with the artistes she had worked with in the past,  the guests brought along generous gifts. Roger Kwok and his wife Cindy Au (歐倩怡) shared that they gave the bride a diamond necklace. Roger said, “She took care of us really well in the past. I’m sure she will take very good care of her husband too!”

28 comments to Him Law and Tavia Yeung Dodge Marriage Questions