Him Law Wants to Be a Dad, But Couldn’t Find the Time Yet 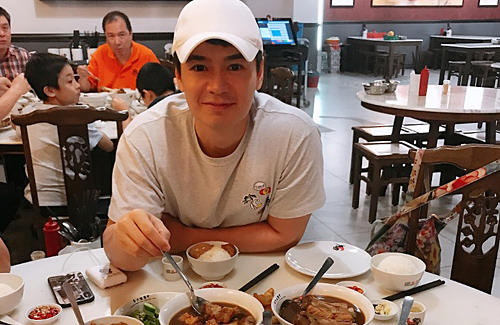 Him enjoys local foods in Malaysia while working with a local brand.

Him Law (羅仲謙) recently became the spokesperson of a Malaysian health brand, in which he will be filming a stream of commercials for it. With his busy work schedule which often required traveling to China since getting married two years ago, Him admitted that it’s been difficult for his wife, Tavia Yeung (楊怡), to get pregnant.

In bed, the couple will sometimes even talk about work. When Him accepted the spokesperson job for the Malaysian health brand, Tavia gave him tips on how to work well with the brand since she was the former spokesperson several years ago. Tavia urged him to practice pronouncing the product names correctly in his ad.

It has already been three years since Him last visited Malaysia, and he is taking this opportunity to also meet his fans. He joked that he is happy he can maintain his figure and looks over the years because some of his fans have grown from students to now married and working professionals.

In terms of his own baby-making plans, Him said, “We already had a plan two years ago. Because Tavia was filming and I wasn’t in Hong Kong most of the time, the timing wasn’t right.” However, the couple wants to leave it up to fate. Regardless of the gender, Him just wants his future children to be healthy.

4 comments to Him Law Wants to Be a Dad, But Couldn’t Find the Time Yet