While they were dating, Huang Xiaoming (黃曉明) had pampered Angelababy (楊穎) like a princess and gave her many surprises and lavish gifts. Tying the knot in a fairy-tale wedding in 2015, the couple’s son Little Sponge was born two years later. Although speculations of Xiaoming and Angelababy’s marriage falling apart are not new, divorce rumors have been flying around again ever since the start of the new year. 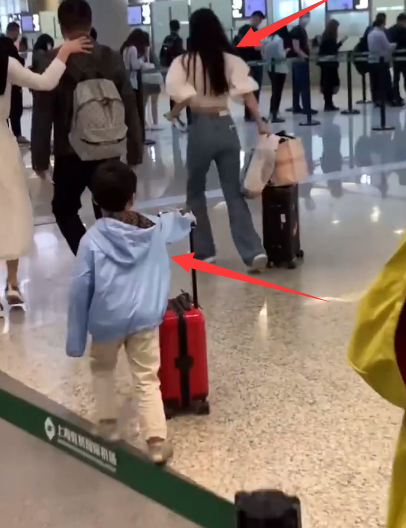 Both have busy work schedules and are often separated long distance, with Angelababy even taking separate vacations with their 4-year-old son. In April, Angelababy’s son was seen at the airport running and trying to catch up with the actress. Angelababy was criticized for not looking after her son properly at such a busy and crowded place. Many netizens also wondered where Xiaoming was and pointed out that he is rarely photographed with the two, fueling divorce rumors further.

Earlier, Xiaoming and Angelababy were seen taking their son to the doctor’s office and going on group outings with friends, temporarily putting a pause on divorce allegations. However, netizens questioned why the two went home separately and did not ride in the same car.

Like many couples married for years raising a young child together, Xiaoming hinted that their sparks may not be as strong as before. “I do feel that, in the end, only family relationships remain. You’ll realize that this world is filled with change. Whether it’s relationships with friends, work relationships, or anything else, they can all change with time, and slowly dwindle,” the actor said in an interview last year.

Despite this, Xiaoming cherishes the family they have together. As Angelababy stayed beside him during the lowest points of his life, Xiaoming has always been very grateful. While Xiaoming admits his career is plateauing, Angelababy continues to be a big variety show star and loved among advertisers. He loves her cheerful personality and her positive  influence on their son.

Although the couple rarely responds directly to their divorce rumors, Xiaoming personally addressed this issue with a reporter recently. He reiterated that the two have not split. Contrary to gossip, he said there are no scandals with other actresses either.

Huang Xiaoming: “I Want My Son to Be Just Like Angelababy”