After much anticipation, TVB’s legal drama Legal Mavericks 2020 <踩過界II> finally premiered on November 16. Receiving widespread praise for the suspenseful storytelling in its first episode, all the elements are in the right place to make viewers want to see more of the thrilling drama. 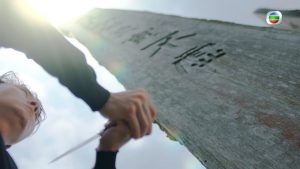 Taking a different route than normal legal dramas, the opening scene does not show main character Hope Man (Vincent Wong 王浩信) battling a court case. Instead, it eclipses a suspenseful scene which shows him ready to commit suicide by plunging a knife into his heart after listening to a voice recording of ex-girlfriend Tracy Chu (朱千雪). Just as Hope Man is about to stab himself, the scene flips back to  one year before Hope Man’s suicide attempt. The clever opening garners enough suspense to leave viewers hanging and eager to see what will happen when this scene comes up again in two weeks.

Although expectations are high for the sequel because of the success of the first installment which aired three years ago, Legal Mavericks 2020 did not waste a single second in the 40-minute premiere. Sisley Choi (蔡思貝) and Owen Cheung (張振朗) resume their roles as Hope Man’s closest friends, while new characters played by Kelly Cheung (張曦雯), Paul Chun (秦沛), and Jessica Kan (簡淑兒) make their entrances.

Kan Siu Wang (Paul Chun) and Eva Shaw (Kelly Cheung) are on opposing sides with blind barrister Hope Man and their rivalry will be a major focus in the drama. During Kan Siu Wang and Hope Man’s speeches, their rivalry and hatred seems to be deeply rooted from the past. The first meeting between Hope Man and Eva in the rain was fleeting–while it did not result in much interaction between the two characters, their rivalry will eventually turn into an unexpected love.

The first episode also managed to incorporate 1.5 legal cases, which featured “The Case of the Wife Murderer” and introduces the second case where Amber Tang (鄧卓殷) jumps off a building and lands on Sisley’s car. With exciting cases and scenes to come, viewers are gearing up for the ensuing episodes to air this week.

With the TVB Anniversary Awards just around the corner, Legal Mavericks 2020 is expected to be a hot contender for major awards.

Highlights from “Legal Mavericks 2020” Episode One: