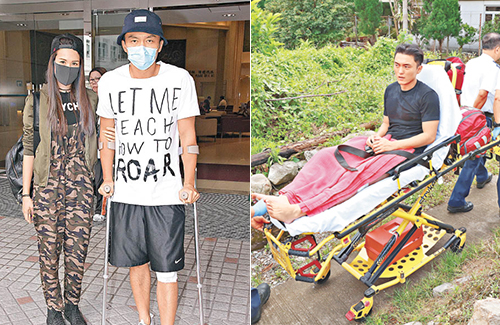 Actor Mat Yeung (楊明) was immediately hospitalized after injuring his knee during a motorcycle stunt for his new TVB drama, Mind Hunter <心理追兇Mind Hunter>. Mat lost control of his vehicle and crashed into a curb. The wound had cut deep into his knee, exposing the surface of his kneecap. He was transferred to a local private hospital to seek immediate hospital treatment.

On Thursday, Mat was seen leaving the hospital with his girlfriend, Lisa Ch’ng (莊思明). Mat’s left knee was taped with gauze and he was using crutches. According to the 35-year-old actor, he received around fourteen stitches on his knee and also had an MRI scan, which fortunately produced negative results. His doctor advised him to rest for two more weeks before heading back to work.

“I feel great,” Mat reassured. “Though [the wound] is quite painful, everything is well. My doctor recommended me to rest around two weeks. I’ll have my first check-up on the 6th.”

Mentioning that his girlfriend Lisa had never left his side while he was in the hospital, Mat, who turned a little red on the face, said, “I’ve definitely caused her a lot of trouble in the past two days. I’ll use the remainder of my time to thank her.” (Marry her now) “What? Let’s talk about this later!”

Asking if Lisa was worried about Mat’s injury, she said, “Of course. I was most worried when I first heard about it, because I had no idea what was going on. But after seeing him and understanding the situation, I’ve calmed down.” (Would you cook some soup for him?) “He needs to watch what he eats anyways as there are many things he can’t eat right now. I’ll think about what to cook.”