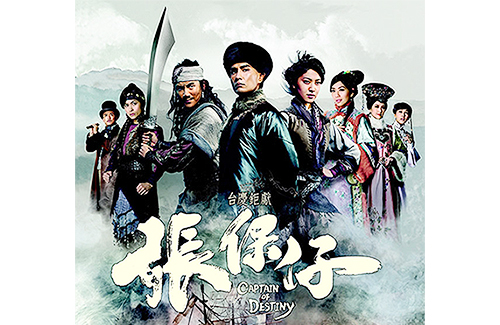 The 2015 TVB anniversary dramas have been determined. Starting off this year-end drama galore is the time-traveling series Captain of Destiny <張保仔>, the second ever television drama to depict the life of the famous Cantonese pirate Cheung Po Tsai. The first one was in 1988, produced by ATV.

The idea of filming an action-adventure series featuring Cheung Po Tsai has been in the works since the late nineties. In 1999, TVB released a teaser trailer for a drama titled Cheung Po Tsai at the TVB Sales Presentation 2000 event, which starred Louis Koo (古天樂) in the titular role. However, plans fell through when the cast dropped out of the project. The lack of funding and the high demand for computer animation also made the project infeasible during its time.

The upcoming Captain of Destiny, which stars Ruco Chan (陳展鵬), Tony Hung (洪永城), Grace Chan (陳凱琳), and Maggie Shiu (邵美琪), also had some casting issues. The project, which is produced by Leung Choi Yuen (梁材遠), wrote the drama with Bosco Wong (黃宗澤) as Cheung Po Tsai in mind. However, Bosco dropped out of the project due to schedule conflicts, and his role was replaced by Raymond Wong (黃浩然). Though Raymond attended the costume fitting for the drama in September 2014, he had to back down after being diagnosed with Behcet’s disease. Tony Hung was called in to replace his role.

Captain of Destiny, packed with action and CGI effects, took about six months to complete. The time traveling series closely follows Hong Kong police officer Wong Tai Mui (Grace Chan), who gets thrown into a time portal when she comes across a waterspout while on duty. She travels back in time to early 1800’s Hong Kong and comes across Cheung Po Tsai (Tony Hung), a powerful pirate controlling the South China Sea. The two strong personalities clashes, but after experiencing life and death together, Wong Tai Mui and Cheung Po Tsai begin to develop strong feelings for each other.

The proud and arrogant Prince Man Ho (Ruco Chan), the eleventh son of the Jaiqing Emperor, enters a war with the anti-Qing Cheung Po Tsai and his crew. After a bloody naval battle, Man Ho captures Wong Tai Mui as a prisoner. Captivated by Wong Tai Mui’s progressive wisdom, Man Ho slowly falls in love and reconsiders his ambition for the crown.

Wong Tai Mui comes across an opportunity to return to modern-day Hong Kong, but is hesitant, and she is unwilling to leave Man Ho and Cheung Po Tsai. In a bold step, she decides to return to the present, but in doing so, she loses her memory of the past.

Captain of Destiny will be premiering on September 21.