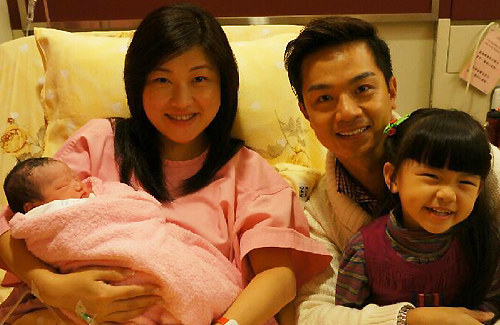 TVB artists, June Chan (陳琪) and Jack Wu’s (胡諾言) second daughter was born on November 27. The baby weighed 7 pounds and 8 ounces. Consulting a feng shui master, Jack and June named their newborn Wu Ching Yiu (胡芷悠), hoping that she will have a leisurely and happy life.

Meeting on the set of King of Yesterday and Tomorrow <九五至尊>, the couple dated for 7 years before getting married in 2009. Their first daughter, Jay, was born in the same year.

Yesterday, Jacky happily announced on his Weibo, “The big day is here!” hinting the impending arrival of his second daughter.  Three hours later, Jack wrote, “Thanks to all the nurses and doctors for their attentive care of my wife and baby, who are both doing well! Thank heaven!”

Although this is the second time that Jack has become a father, he was still nervous in the delivery room. Cutting an umbilical cord for the first time, Jack said, “It’s pretty tough to cut an umbilical cord. When the blood burst forth with my first cut, I was a bit scared. Seeing a newborn life before me, I was scared my daughter will get cold, so I quickly finished cutting the cord. Luckily, everything went well!”