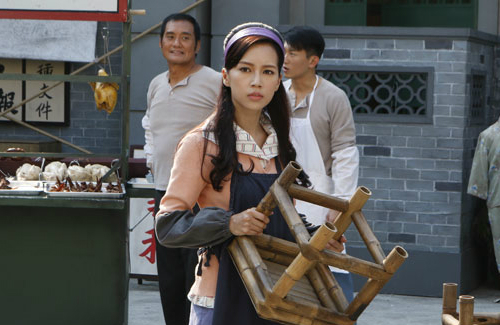 Wayne and Jack portray poor men in the series, and the scene spoke of them having a quarrel. Wayne laughed and expressed that he does not mind playing a poor character, since it saves him time of putting on heavy makeup and fancy costumes. Speaking of working with a relatively new generation of artistes, Wayne remarked, “They’re all really motivated and have done a great job. They’re already much better than us when we were new!”

When asked if he is worried about the series receiving low viewership ratings due to the Lunar New Year time slot, Wayne replied, “To be honest, I’ve never starred in a drama that aired at that time. However, I never really cared about the ratings anyway. They’re hard to control, and I’m just going to do my job as best as I can. When no one has hope in a series, there may be a surprise!” Wayne added he is happy to be working with producer Lee Tim Shing (李添勝) again, since his work attitude is professional and his scripts are solid.

Kelly appeared extremely nervous when she first filmed with Wayne. Even the producer noticed her anxiety and asked to have a chat with her on the side. Kelly shared, “Our producer told me to relax and do my best. He told me that he watched my performance in Captain of Destiny <張保仔> and thought I did well, so I didn’t need to be so stressed out.”

Furthermore, Kelly praised Wayne for his professional acting skills and how a simple look in his eyes would quickly bring her into character. She expressed, “He’s a really strong actor. We’ve only collaborated for a few days, and I’m already very into the series. He’s able to get me immersed in character so quickly!”