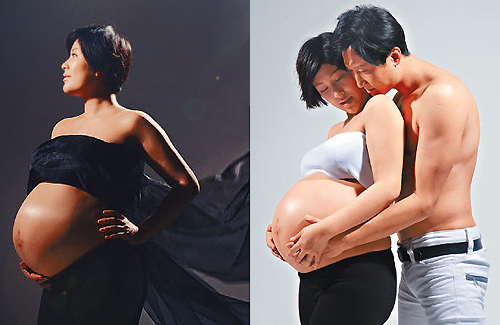 As TVB actress Janet Chow (周家蔚) has wished, her yet-to-be-born son will come into the world as a “Dragon Baby” next week – the last week of the 2012 Dragon Year in the Lunar calendar.

Next week, Janet will go into the hospital, accompanied by first-time father, Timmy Hung (洪天明) for a Cesarean operation to bring their son, Hung Dai Yan (洪大仁) into the world. Timmy had taken time off his work in China to come back to Hong Kong to accompany his wife. Soon after, he will have to rush back to China for another two months before he can see his family again. Fortunately, Timmy’s mother will be by Janet’s side to take care of both mother and son. Timmy wishes that once his current project is wrapped up, he will be able to spend more time in Hong Kong.

Speaking of his family’s plan to have one more girl in the family, Timmy is however, not looking forward to educating his children in Hong Kong. He said, “The education system in Hong Kong is troublesome. Even before a child is born, we have to find a school for them.” Stressing that parent-child communication is more important, both Janet and Timmy do not want their children to be stuck in playgroups without actually experiencing a proper childhood. Instead, they want to be hands-on parents teaching their children the values of filial piety.

Spending most of his own childhood in filming studios where his father Sammo Hung (洪金寶) works, Timmy does not wish the same for his son. He wants to be a participative father who gets to see his son grow up. Though he picked up a skill or two from his time spent at the studios learning martial arts from the instructors when his father was not around, he said, “I grew up in the filming studio because that was where my father worked but I really don’t want my son to grow up like this.”

Several days earlier, Janet was at the photography studio taking prenatal photographs for the second time. With only a black cloth wrapped around her bosom, Janet exuded a pregnant woman’s sexiness with her 42 inches belly revealed. Mid-way through the photo shoot, Janet playfully suggested Timmy to carry her. Timmy turned down that request but removed his shirt to join in the photo shoot, much to Janet’s delight.

Janet glowed when she spoke of her prenatal photo keepsake album. With the studio’s help, she has created an album chronicling her pregnancy – from the 4D sonograms to her own maternity photographs. She proudly declared she will be sharing the album with guests at her son’s 100th day celebration.

Timmy and Janet’s son will only be the first of several children born to Hong Kong celebrities in 2013. In the months to come, expect to see the birth of the children of these celebrity mothers:

Angela Tong – After dating for 6 years, Angela Tong (湯盈盈) announced her pregnancy and plans to wed Chin Ka Lok (錢嘉樂) at the same time last August. The couple had a memorable wedding ceremony at Hong Kong’s Ocean Park with panda witnesses who share the same name and a star-studded wedding celebration in November. Angela’s baby is due in March.

Lisa S. –  Since getting married in South Africa in 2010, Lisa S. and Daniel Wu (吳彥祖) hoped to start their own family. The couple’s wish finally came true and they are expecting their daughter in June.

Ada Choi – Following the birth of their daughter in 2011, Ada Choi (蔡少芬) and Max Zhang (張晉) are expecting their second baby due in June.

Karena Lam – Award-winning film actress, Karena Lam (林嘉欣) has prioritized family over her acting career since getting married in 2010. She is ready to have her second baby, which is due in July.