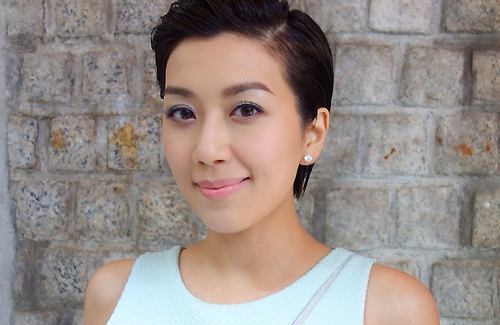 Jason Chan (陳智燊) and Mandy Wong (黃智雯) appeared at a promotional event for a beauty label where they played games with fans and shared their plans for the upcoming Mid-Autumn Festival.

Jason’s mother arrived in Hong Kong yesterday in order to spend the holiday together. Jason said the family will celebrate with his girlfriend, Sarah Song (宋熙年). “Of course, Sarah will be there. We tried to book a table at a restaurant earlier, but it’s too late to make reservations now. I hope to find a place where we can have dinner as a family. They’ve seen each other a couple of times. She doesn’t have any complaints! Sarah has all the qualities that my mother likes!”

Jason and Sarah have been romantically linked for the past three years, but the couple only announced their relationship in August. He previously kept the relationship underground because he was still at the starting point of his career and wanted viewers to focus on his acting. After years of being in a stable relationship, Jason believes it is finally time to openly disclose his relationship.

When asked about his wedding date, Jason replied that he is still in the midst of saving more money to buy a property before making wedding plans. He hopes to marry within the next three years, before he turns 40 years old. After witnessing the success of Moses Chan (陳豪) and Aimee Chan’s (陳茵媺) well-accepted marriage, Jason hopes that fans would be just as encouraging and supportive of his own relationship.

Also present at the event, Mandy disclosed that she plans to have a simple dinner with her family for the Mid-Autumn Festival. Mandy indirectly affirmed that her dating life is going well, but she will be concentrating on work. Since last year, Mandy has been spotted on various dates with Deputy Director of Tse Sui Luen Jewellry, Anthony Jim (詹文天).

Discussing her role in the upcoming series Cheung Po Tsai <張保仔>, Mandy states that this is one of her most challenging roles to-date. In the drama, she will portray a famous prostitute. To prepare for her role, Mandy has been watching a lot of movies to study the behavious of prostitutes, including films starring Gong Li (鞏俐) and Zhang Ziyi (章子怡).