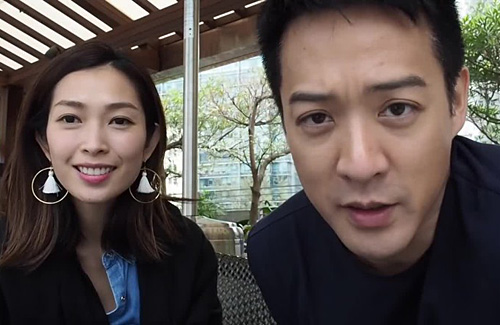 After announcing their baby news last week, Jason Chan (陳智燊) and Sarah Song (宋熙年) recently uploaded a vlog on YouTube, hoping to bring friends and fans along on their journey as expectant parents.

Getting ready to become first-time parents, the couple has been pulling all the stops, including already shopping for a baby carriage despite Sarah only being three months pregnant. Known to be frugal, Sarah exclaimed that the baby carriage only cost her 300 RMB in the video.

While Sarah is fairly relaxed so far in the pregnancy, she revealed that Jason was the one who worried about every little detail and who took every precaution. Acting as Sarah’s nutritionist, Jason monitors his wife’s every meal causing her to cry out in frustration. She exclaimed, “Oh my God, he doesn’t let me eat anything! He would say, ‘Don’t eat that’ and ‘Sit down to put your shoes on’. So annoying!”

Jason shrugged and responded that she has to listen to him during this time although Sarah is normally queen of the household.

Fans witnessing the cute bickering between the two praised the couple for being super sweet and believes they will both be excellent parents when the baby arrives.

Jason and Sarah have been active lifestyle vloggers on YouTube since 2016, where they talk about things they like to do and life together as a married couple. The couple intends to focus more on baby topics as Sarah progresses in her pregnancy.

Jason and Sarah are not the only ones in industry to share some good news with their fans in 2018 though – singer Jason Chan (陳柏宇) and his wife recently shared an ultrasound photo on their social media, revealing that they too will be welcoming a little one soon.