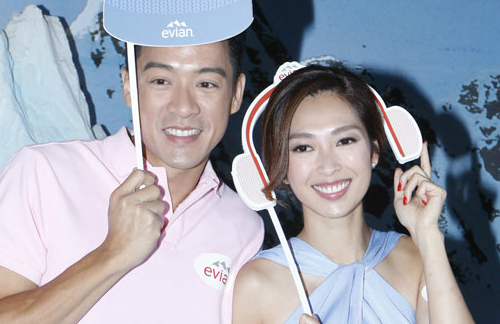 Since their engagement, artistes Jason Chan (陳智燊) and Sarah Song (宋熙年) made their first public appearance as a couple at a function in Causeway Bay. The couple is still trying to schedule their wedding plans, which will likely take place next year, and shared that they will be holding a traditional Chinese ceremony in Hong Kong.

Jason revealed, “We need to accommodate the time with our families. My parents are in England, and Sarah’s parents are in Australia. Although our mothers have met already, we haven’t introduced our entire families yet.” When asked if the couple earns more by attending functions together, Jason laughed and said he should ask his manager. He added that they would be shooting their wedding photos in TVB City, since the place means a lot to them.

Sarah expressed that if the timing works out, she would love to shoot wedding photos and hold ceremonies in Sydney, London, and Hong Kong. However, Jason pretended to wipe away sweat and remarked, “We need to calculate the fees first, and whether we’re going to be able to afford it.”

Earlier reports claimed the couple rented a flat in Ma On Shan that cost $23,000 HKD per month and hopes to start a family in their cozy flat. In terms of the speculations, Jason expressed, “We can’t make it on time! We’ll think of having a child after our wedding!”

Speaking of how TVB Pearl will no longer dub for variety programs or films, Jason stated that he has not heard of the news and is unsure of the company’s decision. When asked to comment on tabloids that claim TVB executive Virginia Lok (樂易玲) wants to leave the station, he remarked, “Never heard about that. I’ll go back and ask around.” Jason added that he has learned a lot over the years by filming dramas, and there are still a few more years left in his TVB contract.