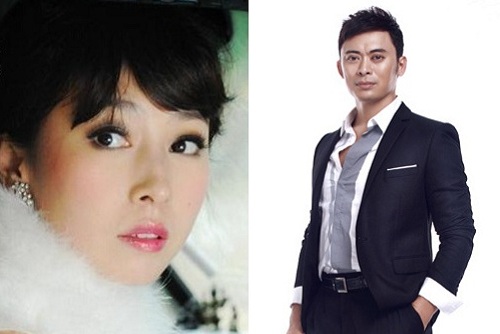 Louis and JJ had never collaborated before, but they were introduced to each other by Louis’ good friend, Timmy Hung (洪天明).  Since Louis is 10 years older than JJ, he impressed her with his thoughtfulness and attentiveness.  Despite their age difference, they still have a lot in common and got along splendidly.

With their evident display of affection on Weibo, JJ and Louis’ relationship recently gained more prominence. Louis is currently filming in mainland China, while JJ is busy filming in Hong Kong.   Due to the distance between them, Louis and JJ relied on Weibo to communicate and develop their new relationship.  It was noted that several of Louis’ posts include part of JJ’s Chinese name “晨,” which led to his friends teasing him.

With the help of Weibo, Louis sent sweet messages to JJ when she was sick earlier. He offered his utmost support when JJ won an award.  No wonder 29-year-old JJ was moved by 39-year-old Louis’ actions, allowing their relationship for further development!

JJ and Louis recently uploaded photographs on Weibo, in which netizens discovered that the pictures were taken from the same restaurant!  This indicated that they may have gone out on a date together!

Ip Man <葉問>star, Louis Fan, is the son of 1970s martial arts star, Fan Mei Sheng (樊梅生). Louis trained extensively in martial arts as a teenager and debuted as an action star in the 1990s.

Known mainly for his martial arts skills, Louis has little negative gossip.  In 1997, he allegedly fought Joey Leung (梁榮忠) for Gigi Fu’s (傅明憲) affections.  More recently, he was rumored to be married with a child, an allegation which Louis denied.

Regarding JJ and Louis’ love rumors, JJ admittedthat she is friends with Louis. Although denying the love relationship, JJ was quick to compliment Louis.  “He is a really good person.  Really nice.”  When asked if there was room for development, JJ replied, “I don’t know.  I don’t have time to date right now.”

JJ expressed that she has been working extensively, from day to night.  She did not have time to contemplate on her love life.  Her wish was to take a couple of months off next year to relax.  At that time, she can think about dating.  Reporters asked if she would then consider Louis?  JJ coyly said, “We’ll see if I can take time off first!”

On the other hand, Louis has not returned the press’ phone calls yet.

13 comments to JJ Jia and Louis Fan Are Dating?