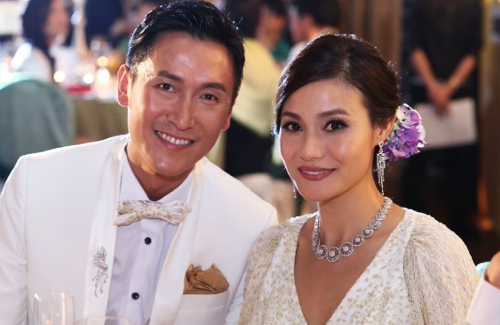 Joe Ma (馬德鐘) and his wife, Karen Cheung (張筱蘭), said “I do” to each other again at their wedding anniversary banquet on June 28. For their 20th wedding anniversary, the couple renewed their wedding vows at a 30-table banquet held at the Western Market in Sheung Wan. The wedding was sponsored by various endorsers, and was also a charity event to help raise awareness and money for Hong Kong University’s Alzheimer’s disease research foundation.

Good friend Almen Wong (黃佩霞) expressed that Karen and Joe did not have a bridal registry and only requested for their guests to present cash as wedding gifts. Almen laughed and said, “My husband and I have only been married for about eight to nine years. If we still look that great when we hit our twenty-year mark, I’ll consider holding a big wedding again! [Karen and Joe] have everything and I really don’t know what to give them. Charity is the best way to go.”

As both Karen and Joe used to work as runway models, many of their model friends also attended the wedding, including retired models Sophia Kao (琦琦), Janet Ma (馬詩慧), and Christine Au Yeung (歐陽妙芝). When they went on stage to take photos with the couple, Joe acknowledged his “beauty” team and exclaimed, “I am so lucky!”

Good friend Ruby Wong (黃卓玲) immediately grabbed the opportunity to snatch a picture with Joe when he found her lost ruby bracelet. She said, “I lost my ruby bracelet earlier tonight, but someone found it and gave it to Joe, and he returned it to me.” Joe laughed, “This is a good one. It’s really expensive!”

Karen and Joe thanked their friends and family on stage, and expressed that a couple must keep their relationship fresh and exciting if they want to maintain their marriage. After their speech, Joe immediately surprised Karen with a wooden statue of the Greek goddess Artemis, surprising Karen with tears.

Karen said, “I really was not expecting this! I visited Joe when he was shooting at Hengdian World Studios, and for this banquet, we went to Shenzhen to do some shopping. I saw this statue and really wanted it, but it was too expensive. I could not believe that he bought it!”

The MC of the event asked the couple’s teenage son, Ma Zai Xiang (馬在驤), if he felt uncomfortable by his parents’ “cheesy” relationship. The 15-year-old replied, “It’s normal!” Joe and his son serenaded to Karen on the violin, adding to the romantic atmosphere of the wedding.

When Karen and Joe proceeded to drink the wine with crossed arms, the audience immediately yelled, “Kiss first!” Joe laughed and said, “I know, we need to kiss! Hurry up!” Afterwards, he said, “Many friends came tonight! I wish everyone great health, old age, and that we can hold another banquet like this in 2063! I hope that by our seventieth anniversary, everyone will be able to come back here to this very place!”