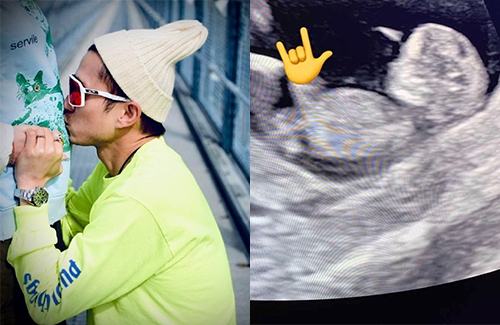 The entertainment industry is delivering happy news one after the other. Following Tavia Yeung (楊怡) and Ava Liu’s (雨僑) pregnancies, Joel Chan (陳山聰) has announced that his wife Apple Ho (何麗萍) is also expecting their first child together!

“My wife never  really cared about surprises,” wrote Joel on Instagram. “But this year, she gave me a present that I have always wanted. Grateful to the Heavens that we are getting a little garlic bulb!”

He continued, “I have another new identity in 2020, Dad Chan! I will work hard to protect you and your mother. I hope you will grow healthily and happily.”

Speaking with the press, Joel said he plans on announcing the sex of their baby on April 4th, Children’s Day.

“Boy or girl, doesn’t matter! I’ll like them all the same,” he said.