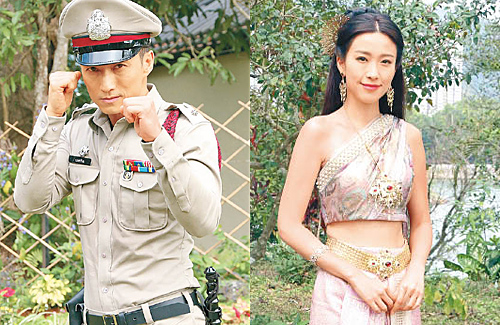 Currently filming for new TVB drama Chinatown <唐人街>, Joel Chan (陳山聰) shared he has been maintaining a strict diet and rigorous fitness routine to strengthen his abdominal muscles. Interviewed at the set along, cast members Elaine Yiu (姚子羚), Pierre Ngo (敖嘉年) and Penny Chan (陳國峰) all said keeping fit is a must for the drama because of the heavy action scenes.

In one of the scenes, Joel and Pierre’s characters test each other’s motives and martial skills. As the long filming hours and action scenes were physically demanding, the cast admitted their energy were exerted. Sweating from head to toe, Joel said, “There are no literary scenes in this drama; they’re all action. But that’s obviously expected if you’re filming a drama produced by Jazz Boon (文偉鴻). Even though I’m sweating all over, at least the weather is still cool. My opponents like Pierre and Penny are also comfortable to fight with. Though, I’ll have to be careful when facing experts like Elaine and Grace Wong (王君馨).”

Pierre added, “It’s like everyone has a really bad temper in this drama. You immediately jump to fight with whoever you see.”

Required to be shirtless for several scenes, Joel has been restricting his diet to achieve the perfect abs. He shared, “Everyone in this drama has to take their shirts off. Phillip Ng (伍允龍), Ruco Chan (‎陳展鵬) Penny, and I all have to be shirtless. Because of that, I haven’t been eating well these past few months. I brought my own lunch, and every single meal consists of chicken breast and brown rice. Now, I’ve got my six-pack abs.”

As for Elaine, who is portraying an Emei weapon master, she also smilingly said, “When I filmed The Unholy Alliance <同盟>, the hardest was to fight while wearing heels. But this time, other than doing the same thing, I also have my costume to worry about. The traditional Thai clothing is a little revealing at the waist and arms, so I have to adapt to it and eat lesser.”