According to a reliable source, Joey Yung (容祖兒) and Wilfred Lau‘s (劉浩龍) five-year relationship has ended. Since the outset of their relationship in 2012, many people did not feel that Joey and Wilfred were a good match due to the disparity in their financial success. It was allegedly this reason that also made the couple break up.

When Joey and Wilfred initially announced their dating status, Joey’s former flame, Denise Ho (何韻詩) felt betrayed and refused to send her blessings. After the scolding drama subsided, Joey and Wilfred continued to face public pressure due to Wilfred’s lack of success in his career. From the start of their relationship, Joey has been very considerate, paying for Wilfred’s vacations and never asking for expensive gifts.

Despite their five-year relationship, Wilfred was unable to gain the support of the elders in Joey’s life. Unhappy that she often had to face battles on her own, Joey and Wilfred drifted apart.

The couple showed signs of a troubled relationship at the beginning of the year, when Joey traveled to Japan by herself. She attended a fashion show in England, and also stopped by Australia and Beijing, without Wilfred in sight. After Joey returned to Hong Kong, she went to Calvin Choi‘s (蔡一智)  gathering without Wilfred, who stayed home by himself watching a sports game that night.

Joey Wished to Have Children 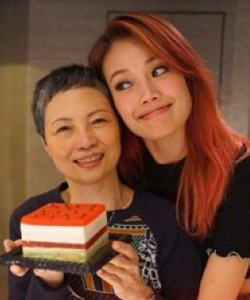 Due to her mother’s poor health, Joey had considered getting married to bring more auspicious luck. In 2015, Joey had stated that she wanted to get married and have children before turning forty. However, Joey changed her mind last year and said, “I don’t intend to get married yet.”

It was understood that Joey and Wilfred agreed to separate on peaceful terms due to conflicting priorities. Joey would like to spend more time taking care of her mother, while Wilfred has been busy preparing for his first concert, which will take place in April.

When reached to comment on the breakup reports, Joey and Wilfred’s representatives responded discretely, “We will not respond to [artistes’] personal matters.”

Friends with Joey for 20 years, Charlene Choi (蔡卓妍) and Gillian Chung (鍾欣潼) respected Joey’s need for privacy and refused to comment on the breakup reports.