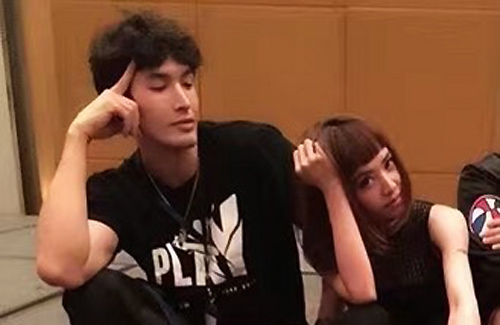 For the first time in their six-year-long relationship, Taiwanese singer Jolin Tsai (蔡依林) and her boyfriend, Canadian-New Zealand model/actor Vivian Dawson (錦榮), released an official photograph of themselves together.

The photograph, which was posted on Jolin’s official discussion forum, shows Jolin sitting on the ground and wearing a sleeveless black shirt and high-heeled sandals. Her head is tilted to the right and is resting on her right arm. At her side is Vivian, who also has his head leaning on his right arm in a similar pose. Vivian’s left arm is propping up Jolin, and he looks quite caring as he gazes at her.

Although Jolin and Vivian have been dating for the past six years, this marks the first time they have released an official photograph of themselves showing off their love together. Fans were understandably thrilled at seeing the photograph, with some shouting “I’ve waited six years!” and others urging the couple to be happy together.

The photograph was posted on July 17, one day after Jolin appeared in Kuala Lumpur, Malaysia for the final stop in her “PLAY” world tour, which appears to hint that Vivian made a special trip overseas to support his girlfriend. During the concert, the floors at the venue were wet due to the rainy weather, causing Jolin to accidentally slip and fall. Nevertheless, she immediately switched her shoes and returned to the stage to finish her performance, drawing much admiration from fans.