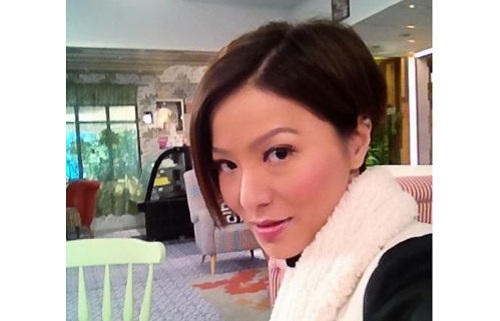 Joyce Tang’s (滕麗名) boyfriend, Matthew Chu (朱建崑) was photographed locking lips with his official girlfriend in a taxi last year. Thirty-six-year-old Joyce was allegedly devastated upon learning the truth that Matthew was two-timing her, and she had become a third party instead. Tabloids  reported that Joyce allegedly mended her relationship with Matthew, succeeding to kick aside his former official girlfriend!

Joyce Tang’s love life has been bumpy, in which she was allegedly cheated upon by her former boyfriends,  Marco Ngai (魏駿傑) and Derek Kok (郭政鴻). Marco had reportedly dated another woman behind her back, while Derek already had a wife and daughter. After two terrible heartbreaks, Joyce met the mature Matthew Chu, a Canon employee who worked in the sales department, at a friend’s gathering. Exchanging phone numbers, Matthew quickly pursued Joyce. An insider revealed that after ending her two past relationships, Joyce craved for true love, and it was not for long that Joyce accepted Matthew’s courtship.

After dating for several months, Joyce allegedly was shocked to discover that Matthew had a girlfriend and he was dating two women simultaneously. She could not believe that she had turned into a third party overnight.

Joyce Plays the Attentive Card to Win Over Matthew

Joyce was reportedly afraid to become a left-over bachelorette. Despite knowing that Matthew Chu had cheated on her, she allegedly forgave him. She decided to put in efforts to contend with Matthew’s official girlfriend in this love triangle. Joyce was very attentive to Matthew, making soup and cooking for him. Joyce also accompanied Matthew wherever he went. Matthew was allegedly moved by Joyce’s gestures and decided to make a clean break with his official girlfriend.

In April, Joyce and Matthew reportedly went on a vacation together in Tokyo. After returning from their “honeymoon trip,” the chirpy Joyce kept mentioning Matthew in front of her friends.

Dressed in a youthful outfit consisting of shorts and white boots, Joyce was spotted two days ago, walking hand-in-hand with Matthew after having dinner. The couple was engrossed in their sweet romance, behaving intimately and seemedly oblivious of their surroundings.

Joyce Tang: “I Am Very Happy”

When asked about her relationship with Matthew, Joyce smiled and dispelled rumors that they had problems. However, she was quick to shoot down marriage plans with Matthew. Joyce said, “I never thought of such a thing (marriage with Matthew). It’s too far away! I never really thought about it.”

Asked if she had a blissful relationship with Matthew, Joyce smiled brightly and said, “I am very happy!”