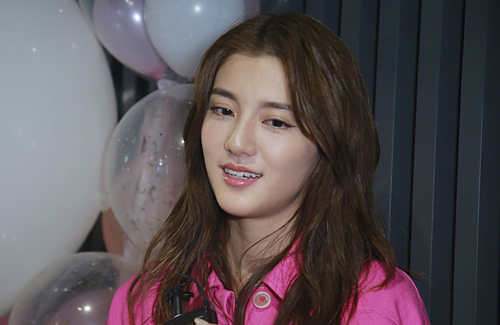 It is hard for Karena Ng (吳千語) to shake off the gold digger label, which has followed her for years since she dated Raymond Lam (林峯) when she was 19 years old. It was rumored that when she was still dating Raymond, she often requested to go on international shopping trips to buy luxury bags, to eat at fancy restaurants, and to live in luxuriously–materialistic demands which overwhelmed Raymond. Her current relationship with wealthy businessman Brian Shi (施伯雄) is often gossiped about in the same manner. While Karena has a penchant for designer labels and enjoys taking luxury vacations with her boyfriends, she denies being a gold digger and is only attracted to men who are talented, smart, and good looking.

At a press conference for ViuTV’s new drama Iron Ladies <熟女強人>, Karena’s dating life overshadowed interest in her role in the drama. She joked that it has been a long time since she has been interviewed by the media and is having a hard time focusing. “I’m not sure why, but I feel so tired today. When being interviewed, you need to be on your feet thinking quickly. To be honest, it’s been awhile so I’m not used to it.”

As questions shifted towards the status of her relationship with Brian Shi, a wealthy third generation whose family has over 10 billion Hong Kong dollars in assets, and whether the couple intends to get married, Karena took on a more serious tone.  While it was said that Brian is preparing to propose to next year after purchasing a HK$30 million home in Clear Water Bay’s Mount Pavilia, the 26-year-old actress said she is still young and has plenty of time. She would like to think about marriage when she has gained more maturity. “At this point, I still haven’t figured out how to take care of myself! I’ll think about this later.”

Commenting on the gold digger allegations, Karena stated, “Well the truth is that I am working to earn money. If I were really a gold digger, I would have already married and stopped working. Why would I still need to do so many things? I want to have my own life. People often ask if I am going to marry or not, but I want to live for myself and not for someone else.”

11 comments to Karena Ng Denies Being a Gold Digger