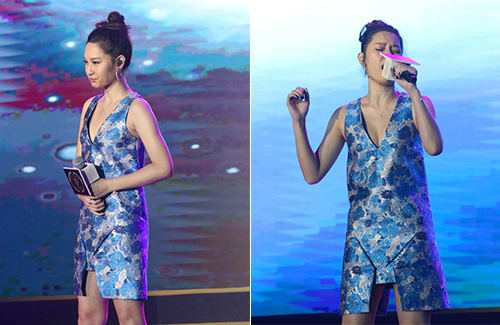 Kate Tsui (徐子珊), Johnson Lee (李思捷), Tiffany Ting (丁悅), Natalie Tong (唐順用), and vocal group Ho Tak Brothers (好德兄弟) attended a mini concert event in Kuala Lumpur. Kate, who wore a deep-V gown, was speculated to have had a “nip sip” while she was performing on stage, but the former TVB actress said in a later interview that her outfit was “extremely safe.”

“Impossible,” said Kate. “My outfit is extremely safe. Maybe it looked like I had one because I’ve gotten skinnier.”

After ending her contract with TVB last year, Kate has yet to sign with a new company. However, the actress is currently busy promoting her film Buddy Cops <刑警兄弟> in mainland China. The movie, which also stars Bosco Wong (黃宗澤) and King Kong (金剛), was shot over four years ago.

In regards to working in the mainland, Kate said she is interested in starring in a Chinese reality television show. “Those Chinese reality shows are crazy and I love having fun.”

Asking if there has been any production teams who have approached her about starring in one, Kate revealed, “Yes, but I’m afraid of doing more extreme things like touching insects or snakes. I need to choose wisely.”