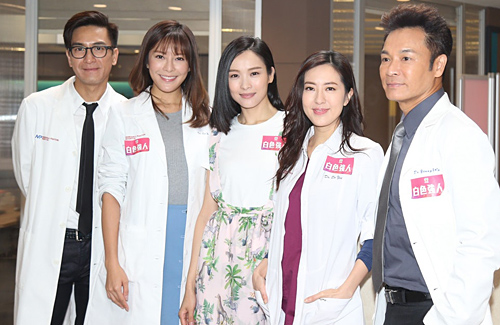 Since Kenneth and Ali portray pulmonologists, they have many emergency room scenes. As Ali had a fear of blood and even fainted after slicing her fingers while making a salad one time, reporters asked if she had any difficulty with her emergency room scenes. Ali smiled and said, “I realize I’m more afraid of my own blood and not others. We already filmed so many scenes with blood already.”

As Kenneth has portrayed a neurosurgeon in The Hippocratic Crush <On call 36小時> before, Ali asked what type of doctor role he prefers. Kenneth laughed, “Of course a gynecologist; there are more pretty girls to look at. Our drama has a lot of pretty cast members, such as Ali Li and Kelly Cheung. The producer gave us two women each: Roger is paired with Natalie Tong and Kelly Cheung, and he has the most passionate scenes in the drama.”

Portraying a brain surgeon in Big White Duel, Roger admitted that his lines are complicated and filled with medical jargon. Roger said, “The lines are longer than portraying a lawyer. I would go home and memorize my lines as I’m afraid that I would keep everyone overtime at work. After I say them, I’ll ask Kelly if I pronounced the words right. So if I make any mistakes, they’re because of her.” Kelly laughed and said, “Fortunately I have a lot of Chinese words to ask Roger, and he has English phrases to ask me. Both of us won’t feel embarrassed asking each other.”

Aside from focusing on medical cases, Roger revealed that the drama will touch upon some controversial issues within the global medical industry. Roger said, “I hope we can find solutions so that everyone can get the right medical treatment despite their financial situation.”

Asked if Big White Duel will be Roger’s last drama with TVB now that he has signed with Wong Cho Lam‘s (王祖藍) studio, Roger said, “No, I’ll go where there are good scripts.” 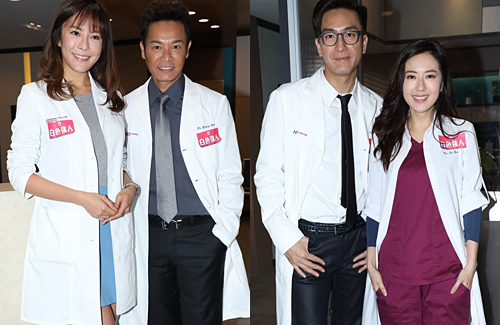