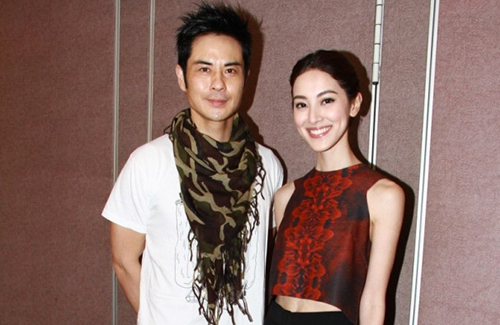 This past weekend, Kevin Cheng (鄭嘉穎) treated the cast and crew of Blue Veins <殭> to a lavish three-table dinner banquet. Though the fantasy drama about vampires did not meet viewership ratings expectations, Kevin insisted to treat everyone to dinner to celebrate their work and efforts on the show.

“I hope everyone will continue to work hard!” said Kevin. “I really want to encourage everyone. This drama is different from typical dramas. There’s a lot of fight scenes and a lot of CGI. It’s a lot harder to film!”

Remarking that the style of Blue Veins is different from typical Hong Kong television dramas, Kevin added that high ratings shouldn’t be something to be expected. “Regardless, it’s a good thing see something different on the market so the viewers can have more choices. If every drama is to be the same, why not just watch Come Home Love <愛回家>? I do hope to try more new things.”

With the final episode airing next week, Kevin also teased fans about what they should expect in the upcoming episodes. “Two powerful male and female vampires will be introduced. They’re really good. Even my character won’t be able to beat them!” What about his relationship triangle with Kay Tse (謝安琪) and Grace Chan (陳凱琳)? “I don’t want to spoil it!”

The dinner gathering included Kevin’s girlfriend and costar, Grace Chan. The former Miss Hong Kong beauty queen said she and Kevin have been watching the drama together lately.

“[Kevin] was always so encouraging,” said Grace as she recalled their moments together while filming the show. “We didn’t start dating until after we finished the show. I can’t believe it’s already been over a year.”

Kevin, who plays an immortal superhuman, is reminded of his past when he meets the university student Yoyo (played by Grace), who resembles his wife from 400 years ago. “The scenes we did together were pretty sweet,” said Grace. “My friends watched them and now they understand why we got together.”

Grace, who was criticized for her poor acting performance during the broadcast of Captain of Destiny <張保仔> last year, is receiving nods for her noticeable improvement in Blue Veins. She said, “It’s true that I had a lot more confidence while filming Blue Veins.” Asking if Kevin’s DVDs had helped her improve her acting, she said with a laugh, “He had many scenes with me. Having him around to look after me did help me a lot!”

On shooting the series with Grace, Kevin said, “Indeed, there were many good memories.” In regards to his scenes with Grace, what were his best memories? “We shot our scenes around Valentine’s Day last year. During those days it was just me and her.”

Will Kevin and Grace work together again on future projects? “Not in the near future,” said Kevin. “We will have solo developments. She will not be in the drama I’m doing next.”