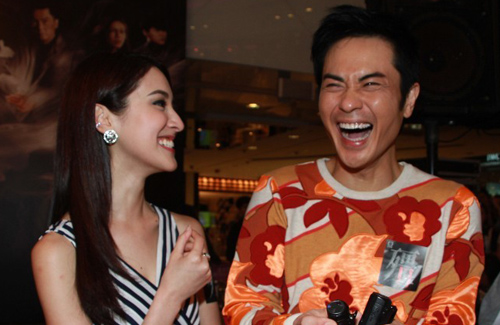 With Blue Veins <殭> airing its finale on May 15, Grace Chan (陳凱琳) and Kevin Cheng (鄭嘉穎) attended a promotional event for the drama, hoping to help boost viewership ratings. Although Blue Veins is coming to an end, Grace can be seen next in reality show A Starry Homecoming <星星探親團>.

Filming in Vancouver for the show made Grace miss the place where she grew up even more. When she was five years old, Grace moved to Vancouver. Although her childhood memories are there, Grace wants to continue to stay in Hong Kong because of her parents, brother, and Kevin.

Spending Mother’s Day With Their Own Mothers

Asked how they had spent Mother’s Day this past Sunday, Kevin and Grace revealed they spent it by pampering their own respective mothers. When asked if Kevin bought Grace’s mother a present, Grace said, “Whenever he sees something she may like, he buys it for my mother. It’s not just for special occasions.”