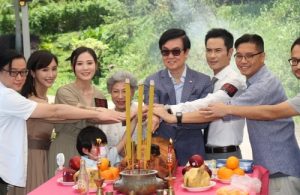 Kevin Cheng (鄭嘉穎), Rebecca Zhu (朱晨麗), and producer Raymond Wong (黃百鳴) attended the blessing ceremony of their new movie Burn <焚身> (tentative title) today. In the film, Kevin plays a doctor who is married to Rebecca, and they have a son together. He wreaks havoc in his marriage when he cheats on Rebecca with one of his mentally ill patients, portrayed by Dada Chan (陳靜). Kevin exclaimed, “It caused a huge disaster, almost ruined the family! This movie is a warning for all the married men watching; do not cheat in your relationship!” 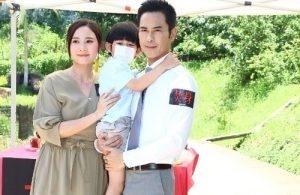 When reporters asked if he has intense, intimate scenes with Dada, he laughed and said, “Not really. It’s more intense than what you see in dramas, but it’s not that extreme for a film.”

The actor said he notified his wife Grace Chan (陳凱琳) about those scenes. “The good thing is that she is also an actress, so she understands!” he expressed.

As the blessing ceremony is Kevin’s first public appearance after he and Grace announced their second pregnancy, reporters bombarded him with questions about Grace’s well-being. Kevin disclosed that it is unlikely that she will visit him on the film set since she is pregnant. “It’s hot and dangerous,” he said disapprovingly. “I don’t want her to go out that much.” 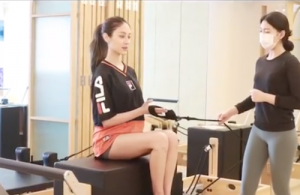 Still, Grace has been staying active during her second trimester and sharing videos of her fitness journey online. He said, “Her personality is like that; she can’t sit still. She thinks staying at home is a waste of time, but I want her to rest. Even so, she is old enough to make her own decisions. It is all about mutual respect, and I understand that it is boring at home.”

In regards to the baby’s gender and Grace’s due date, Kevin said he is scared of saying the wrong thing, so he will wait for Grace to announce the news. Aside from the couple becoming second-time parents, their son Rafael is also becoming an older brother. “He doesn’t know how to talk yet. We are scared he might accidentally hit Grace’s stomach because he doesn’t know that there is a little human inside,” Kevin shared.

With another child along the way, Kevin is working hard to earn more milk money. In fact, it is speculated that Kevin will film a TVB drama to repay Grace’s debt, as she has been rejecting roles because of Rafael. Hearing this, Kevin laughed and said, “Does the world work like that? A son is obliged to pay his father’s debts? Don’t believe that!” 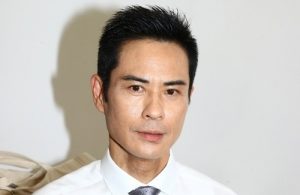 Though he added, “There is always a possibility [that I will come back to film at TVB] as nothing is set in stone. I will share [the news] when the time is right.”

On the other hand, there have been rumors that Grace is planning on leaving TVB. Unsure of the news, Kevin said, “I believe she signed a very long contract back then. You guys will have to ask her next time.”