Liddy Li is the Daughter of Gunman Who Committed Suicide 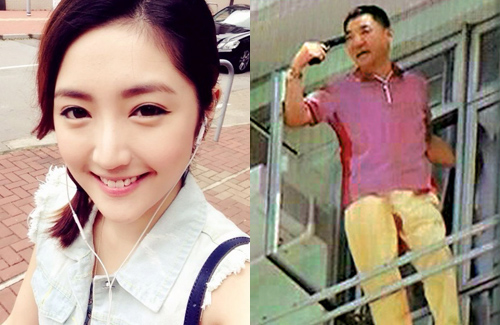 While news about director Oxide Pang (彭順) and Liddy Li’s (李悅彤) extra-marital affair has yet to subside, Liddy suffered another blow when her father, Li Duk Yun (李德仁), committed suicide after shooting himself in the mouth on June 1. Despite wearing sunglasses and a face mask when she appeared at the public mortuary to identify her father’s corpse, Liddy was recognized as the elder daughter of Li Duk Yun.

Unemployed 51-year-old Li Duk Yun shot his neighbor, Liu Kai Chung, after a dispute. Li locked himself at home and had a standoff with the police. Over 200 members from the police force were dispatched to the Kowloon Bay area, including the CIB, SDU, PTU and EU teams. Finally, twelve hours later, Li turned the gun on himself and ended his life.

The police is uncertain about Li’s motivation for the shooting and his own suicide. Several years ago, he was injured and could not continue working as a chef. He grew addicted to gambling and became straddled with debt. Police suspect that his death may also be connected to the recent negative gossip between Liddy and Oxide. Although the police are trying to contact Liddy’s family for further information, the Li family and Oxide Pang have not been answering their phones.

Li left Liddy’s mother for another woman when she was younger. After the divorce, neighbors stated that he often came back to visit Liddy and her younger sister. However, Li often visited while drunk, and beat his ex-wife while Liddy and her sister cried in a corner.

Because of the divorce, Liddy shouldered the duty of taking care of her family immediately after graduating from high school – she reportedly became a nightclub hostess and later became a pseudo-model.  This led many to believe that Liddy fell in love with Oxide Pang, who is 22 years her senior, because she lacked a father figure in her life.

When news broke out about Liddy’s pitiful family background, many sympathized with her. Although Angelica Lee‘s (李心潔) marriage suffered because of Liddy’s affair with Oxide, Angelica’s father said, “Liddy’s father is very ferocious; she is very pitiful. Perhaps because of her parents’ divorce, she turned out this way.” Mr. Lee also added that Angelica was in the hospital earlier because of stomach acid pain and did not commit suicide. He has lectured Oxide on his infidelity, but the Lee family has forgiven him for his mistakes.

Carina Lau (劉嘉玲) also commented on Liddy’s case, “[The press] needs to be kinder to her. There are many perspectives to every story.”