Linda Chung Has The Confidence To Fight For TV Queen; Nancy Sit Blows Up Over The Poster Arrangement 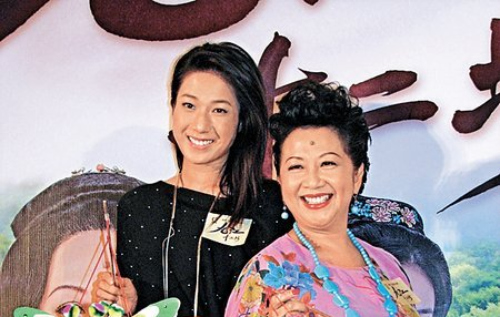 When the topic of the TVB Anniversary TV King and Queen awards was brought up, Linda professed that she has the confidence and said, “My reaction in Yes Sir, Sorry Sir《點解阿Sir係阿Sir》was unexpectedly well-received and I gained a lot of fans as a result. Furthermore, the audiences also like my role as Miss Koo in “Yes Sir, Sorry Sir” hence I will be shooting a spin-off series centralizing around Miss Koo in the month of November.”

Linda continued, “Of course I do hope that I could win the “My Favourite Female Television Role” award based on my role as Miss Koo too.”

When mentioned about her ex rumored boyfriend Raymond Lam‘s (林峯) new drama, Men With No Shadows《不速之約》, being accused of plagiarizing Death Note《死亡筆記》, Linda responded, “I’m not too sure. But they will always say that every time when there’s a new drama series. Actually having filmed so many dramas, it is inevitable as there will easily be slight similarities in the plots every now and then. However, I feel that their drama seems attractive and Bobby Au-Yeung (歐陽震華) is also rather comical.” On the other hand, it was evident that Nancy Sit’s image was heavily enlarged on the backdrop, in an eye-catching position, as compared to the first promotional event for “River of Wine”.

This was because during the first “River of Wine” promotional event, Nancy Sit felt that her portrait image on the poster was too small. This made her extremely displeased as it thrust her into a supporting character, which prompted her to  reflect it to the producer.

While attending the “River of Wine” promotional event yesterday, Nancy Sit revealed that she had earlier on expressed her dissatisfaction to the producer, Wong Wai-Shen (黃偉聲), about her positioning in the promotional poster.

Nancy continued to say that Wong Wai-Shen explained that it was a printing problem and promised her that he would make sure the problem doesn’t persist again for the second promotional event.

Nancy also joked that she would look at the backdrop first when she enter the venue in the afternoon and would entertain thoughts of leaving if it wasn’t amended by then.

However, upon reaching the venue, she immediately felt happy again upon seeing that there was marked improvement in the poster during this current promotional event.

Nancy professed that she only filmed one to two drama series for TVB every year hence she was obviously uneasy about being treated as a supporting character when she was in fact the main lead of the drama.

Nancy proceeded to say that after seeing her discomfort, the producer was sensible and understanding enough to make the immediate amendments.

Nancy also emphasized that she wasn’t petty but just felt a little unsettled as her relationship with TVB has always been good and they had said that she would be acting as the main lead when they had initially invited her to film this drama.

Since yesterday was the Mid-Autumn Festival, did Nancy remind her children to be careful while celebrating it with their other half?

Nancy replied that she is an open-minded parent and will give them space for their own activities but she did ask them to enjoy and appreciate the full moon and didn’t ask them to “eat the moon”. [Caption: Nancy Sit emphasized that she was one of the main leads hence she was not used to being placed on either sides of the poster] [Caption: Evergreen Mak (麥長青) was already used to being the supporting character] Linda also expressed that she knew Raymond was portraying a devil and felt that the concept was rather appealing.

93 comments to Linda Chung Has The Confidence To Fight For TV Queen; Nancy Sit Blows Up Over The Poster Arrangement