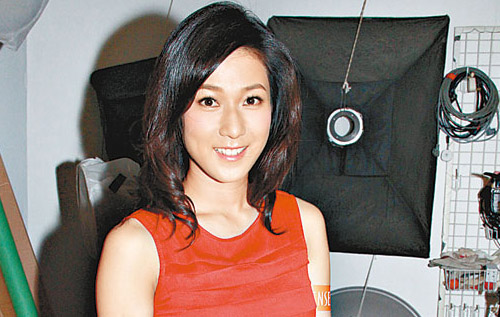 TVB artist, Linda Chung (鍾嘉欣) shot a tissue paper commercial for ZENSES yesterday. It was Linda’s second year of being a spokesperson for them. While taking photos, she accidentally revealed her bra strap.

Linda revealed that she was recently busy filming Happy House, Hidden Dragon <樂府藏龍> and had to perform a Chinese dance non-stop, almost everyday in this drama. Linda also expressed that after that, she will immediately be starting filming on Lucky Father <當旺爸爸> with Steven Ma (馬浚偉), Ha Yu (夏雨) and the rest of the cast.

Asked about her performance in Yes Sir Sorry Sir <點解阿Sir係阿Sir> as Miss Koo receiving rave reviews and being viewed as a hot contender for the TV Queen award, Linda professed that receiving praises was like magic hence she felt surprised. Linda continued to say, “I want to thank everyone. I feel confident too but to me, getting an award is not the most important. This drama (Yes Sir Sorry Sir) was broadcasted during April, when there were many public holidays. Receiving good feedback made me feel like I have already won.”

Asked amongst the contenders for Best Actress who Linda felt was her strongest opponent, she replied, “I have been filming Happy House, Hidden Dragon with Myolie Wu (胡杏兒) and I feel that she’s really professional. In fact, Myolie is already preparing to receive the award. Besides having confident on myself, I also place my bets on her.” Linda professed that because Charmaine Sheh (佘詩曼) had left her TVB nest, it made the outside world feel that she and the other TVB fadans have a bigger chance this year.

Asked whether she had heard the news about her fellow TVB colleague, Joel Chan (陳山聰) dating casino king’s daughter, Florinda Ho (何超雲), Linda expressed her well wishes to the couple, “Congratulations to Joel, I have filmed with Joel before in Virtues of Harmony <皆大歡喜>. It was a happy experience collaborating with him. I knew that he is a good guy, being able to find someone who appreciates and loves him, I feel happy for him too!”

Compiled from Mingpao and Orientdaily.on.cc