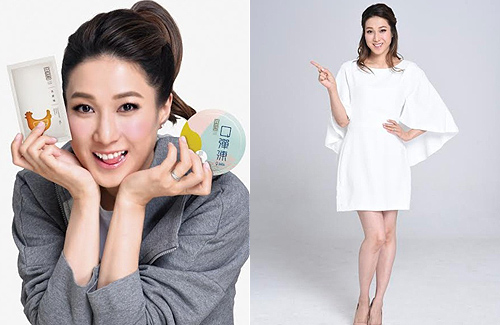 Since Linda Chung (鍾嘉欣) married chiropractor Jeremy Leung and gave birth to their daughter, she has significantly reduced her workload and spent the majority of her time in Canada. Despite making frequent short trips to Hong Kong for work, the 33-year-old actress will not resume filming dramas any time soon. Embracing motherhood, Linda also shared dietary secrets on maintaining her own wellness so she can take good care of daughter Kelly .

The first-time mother recounted her labor experiences. “I was in labor for 15 to 16 hours and was pushing for an hour and a half. Kelly came out head first, then shoulders, and when her fingers were out, she used her pinky finger to grip on to the doctor’s finger. The doctor said that in the years he has been delivering babies, this has never happened to him before. He said that when the baby grows up, she’ll definitely be a special baby!”

When Linda first shared photos of Kelly as a newborn, many fans complimented that Kelly had a head full of hair and is very cute. Upon hearing the comment, Linda gushed, “She’s really cute, isn’t she? So much hair! At the time, I wondered why all her facial features were so pronounced already. The doctor explained that it’s because the baby got enough nutrients. I planned on breastfeeding Kelly until she is one year old, so I had to take really good care of my body after giving birth. As long as my blood levels are good, I can produce enough milk to breastfeed the baby.”

Although born and raised overseas in Canada, Linda followed the Chinese tradition of postpartum confinement. Motherhood seems to agree with Linda, as the actress glowed with an air of youthfulness. Linda shared that her dietary secret is concentrated chicken essence, which contains an abundance of nutrients. “Concentrated chicken essence has a small amount of high quality protein and a lot of other necessary nutrients. It increases metabolism. Increasing protein intake is very important to postpartum women. During pregnancy, chicken essence can also help increase the weight of the baby, but not the mother. After giving birth, it’ll help increase the rate of recovery and prevent you from ballooning too!”

Despite embracing the joys of motherhood, Linda has not forgotten about her fans. She revealed, “Some fans asked when I’ll return to Hong Kong. I’ll be back in Hong Kong early next month for work. There will be free samples of chicken essence for tasting at the event. Hopefully I can see everyone then!”