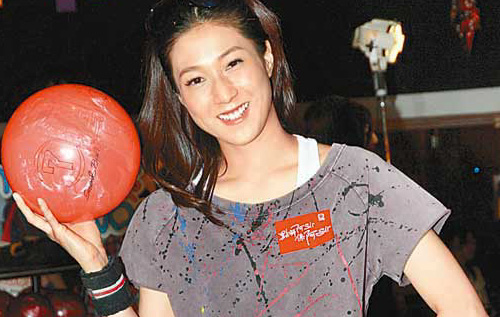 In Yes Sir, Sorry Sir <點解阿Sir係阿Sir>, Linda Chung’s (鍾嘉欣) bowling teacher character, Miss Koo, had a nervous breakdown and earth-shattering cry when she found out that she was deceived in love by Moses Chan (陳豪). Linda’s portrayal as Miss Koo was widely acclaimed, even marking her as a popular choice to win the Best Actress Award at this year’s TVB Anniversary. Although the awards results were uncertain at this point, TVB will film a spin off series derived from Yes Sir, Sorry Sir in which Linda will reprise her role as Miss Koo.

Originally, Linda filed for two months of vacation to return to her home in Canada after completing the filming of Lucky Father <當旺爸爸>. This will allow her to take a break from the strenuous filming schedule, in which she filmed over 100 television episodes this year. Since it has been confirmed that Linda will star in Producer Lau Ka Ho’s new Miss Koo spin off series at the end of November, Linda’s vacation plans have been ordered to be shortened.

Linda was excited to reprise her role as Miss Koo, “Aside from myself, many audience members also liked the character of Miss Koo very much. It’s a very special feeling to be able to film a spin off series. Actually, this character resembers the cool teacher character found in OL Supreme <女王辦公室>. I never considered this would happen to me, that a producer would ask me to portray such a cool character. I hope to continue the bold aura of Miss Koo!” Linda hoped to follow Laughing Gor’s spin offs into the film industry as well, which would make the situation even more perfect!

The attraction of Miss Koo was undeniable. Even Charmaine Sheh (佘詩曼) praised Linda’s performance in the role, while noting that Linda had a good chance to win the Best Actress Award. Linda responded, “Of course I have confidence. However, I think I have a greater chance in winning the Favorite Female Character Award instead.”

Jayne: I look forward to seeing Linda act opposite Bosco Wong. I wonder if the Miss Koo spin off will be filmed in the same “comedy on steroids” style of Yes Sir, Sorry Sir? Also will the series take place in the school environment with rough kids again?