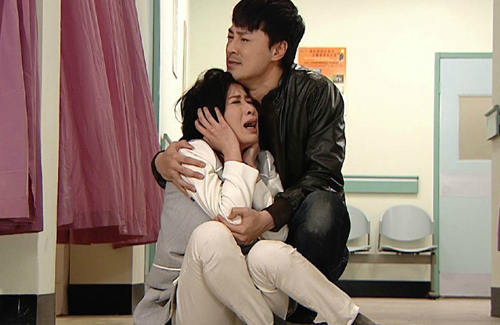 After much anticipation, the fifth undercover cop in Line Walker <使徒行者> was finally revealed last week. Originally, Benz Hui (許紹雄) was the most popular guess, but it turns out that the real undercover was Samantha Ko (高海寧).

Before Samantha revealed herself as the real undercover, Raymond Lam (林峯), Charmaine Sheh (佘詩曼) teamed up with Benz, who had plans to surrender himself once the case closes, to take down true leader behind the powerful triads. Unfortunately, under Samantha’s commands, Benz was held at gunpoint and ultimately shot himself using Raymond’s gun. Not long afterwards, the members of the triad killed all three of Charmaine’s mothers.

According to leaked details, Charmaine, Samantha Ko, Oscar Leung (梁烈唯), and Sammy Sum (沈震軒) will not live to see the end. Line Walker’s character death toll will break records. Producer Man Wai Hung (文偉鴻), disclosed, “There are a lot of rumors in the air lately. I can only say that there will be more than one death in the finale.”

Man Wai Hung also added that there is in fact a sixth undercover in the series. Some viewers exclaimed that Sharon Chan (陳敏之) is technically the sixth person since she joined Michael’s team in the middle of the case.

Although Michael Miu (苗僑偉) was the good cop since the beginning of the series, some viewers wondered if he may be a mole. Creating even more confusion, the preview for this week’s episode showed Michael using Charmaine as hostage and holding a gun to Raymond’s head. In the opening credits, Michael was seen getting ready to shoot Sharon Chan (陳敏之). After claiming that he would uproot the entire triad and black cops organization, will Michael turn against his original intentions?

Boss of the Boss

Despite disclosing her true identity, it is revealed that Samantha had already joined the dark side in the midst of her undercover cop days and is just playing along with Michael and Raymond’s game. She disclosed that there were four powerful figures behind the Mr. Song identity including, Stefan Wong (黃長興), Law Lok Lam (羅樂林), Esther Wan (溫裕紅), and Joseph Yeung (楊瑞麟). Unknown to the undercover police team, there is a bigger power behind those four – a final boss they must defeat. It is speculated that Chung King Fai (鍾景輝) is the final boss behind the terrifying organization.

The finale of Line Walker will be aired on Friday, October. During its broadcast, viewers will be able to vote for a tragic conclusion for Charmaine Sheh and Raymond Lam, or decide the lovers should have a happy ending.