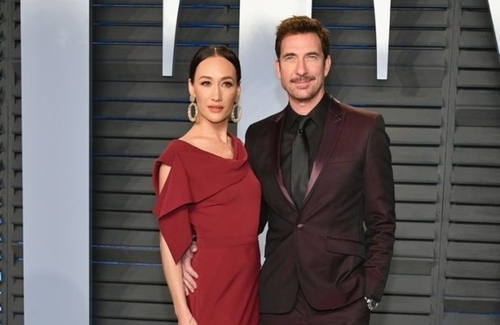 Stalker castmates turned lovers 39-year-old Maggie Q and 57-year-old Dylan McDermott have called it quits after four years. The two became romantically involved after portraying on-screen lovers in the TV show, and the relationship was revealed in the fall of 2014 when they were spotted getting cozy in public. Following the exposure, they announced their engagement in January 2015. However, they never decided on a wedding date, and now their engagement is canceled.

In March 2015, Maggie said they were both busy with work to plan the wedding and added “because you gotta balance everything.” Despite never acting on their engagement, the duo often commented on each other’s Instagrams and made public apperances together. The last photo Maggie uploaded of themselves was towards the end of last year when they made a couple appearance at the Wild Aid event. Dylan also admitted he’s head over heels for Maggie. He said, “The cool thing is if you trust life and open yourself up to good things, good things can happen. [Maggie] took my breath away.”

Although both parties have yet to confirm the split, the lack of couple photos on their social media might shed some light on the situation. Maggie recently uploaded a photo of her dog passing away and Dylan commented, “He was the best dog ever!” On the other hand, Dylan has been frequently uploading photos of him and his 22-year-old daughter, Colette, his first born with his former wife, Shiva Rose. They were married from 1995 to 2009 and share another daughter, 13-year-old Charlotte.