Mandy Wong Hopes to Get Married Before 35 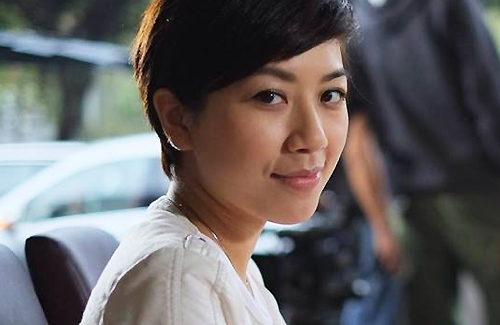 When it comes to rising TVB fadans, Mandy Wong (黃智雯) is definitely the first to come to mind. Willing to sacrifice physical beauty for her craft, the 2007 Miss Hong Kong finalist is willing to take on any role, whether it is a villain, a hateful housewife, or a naïve student. “Flora Chan (陳慧珊) told me that if I want to succeed in this industry, I have to disregard my looks. The only way to leave a lasting impression on the audience is through my acting.”

Mandy revealed that she earned her first notable role, ,A Chip Off the Old Block’s <巴不得爸爸…>  “So Fung Lin” when she was still in TVB acting class. She said, “On the day of graduation, we were given the task to perform our own skit. Most of my classmates chose to act out roles that were similar to their own characters, but I decided play the role of a little kid. The role stood out from the rest. Producer Poon Ka Tak (潘嘉德) noticed and decided to cast me as So Fung Lin. That role was when people started to notice me.”

A dancing major when she was in college, Mandy was born to be a performer. In fact, one of her main reasons for participating in the Miss Hong Kong pageant was to get TVB’s attention and have the station recruit her into their acting department.

“Joining a beauty pageant was just a way for me to join TVB’s acting department faster. It was the best way. My fellow candidates and the media all told me that I was a popular favorite to win. Although I became a finalist, I was actually praying not to win the crown! If I did win, I would get a ‘background check’, and I would lose a lot of my freedom and privacy. But this thinking was stupid. If I actually had my name known, my road would have been a lot easier.”

The winner of last year’s Most Improved Actress award, Mandy’s career gained momentum after starring as “Kwan Yi So” in 2012’s L’Escargot <缺宅男女>. Now at the mature age of 31, Mandy expressed that she is still working on achieving new heights in her career – and maybe even start a family before she turns 35! So does this mean that Mandy already has someone in her life? Mandy smiled.

Mandy broke up with her boyfriend of four years soon after participating in the Miss Hong Kong pageant. With her busy schedule, it was difficult for Mandy to find the time and energy to meet prospective partners. “But I’ve come to my senses now. In the past, when my friends had someone they wanted to introduce to me, I would come up with an excuse to not go. I suddenly came to my senses this year. It is normal to meet new guys and eat out with them. I do want to expand my own social network anyway. Don’t believe that it is easier for artists to meet new people – it’s actually much harder for us.”

What is Mandy’s ideal type? “I am very serious when it comes to relationships. I do not like casual dating. If I am in a relationship, he will have to be the one. I do want to get married and have kids before I turn 35. I still have four years left! My boyfriend does not have to be very rich. It is better if he is not in the entertainment circle. Mental compatibility is more important than physical compatibility. We have to be able to hold long conversations with each other. I believe in fate, and I am sure this person exists.”

So has Mandy’s Mr. Right appeared? “Can’t say, but I have met someone who does meet the requirements. We are seeing each other, so don’t make it sound like we are dating! If I do date in the future, and the media finds out, I will not deny it.”

32 comments to Mandy Wong Hopes to Get Married Before 35